Archers have been smashing records up and down the country this year. We caught up with two young archers, Finlay Clark and Evie Finnegan, to hear about their achievements. 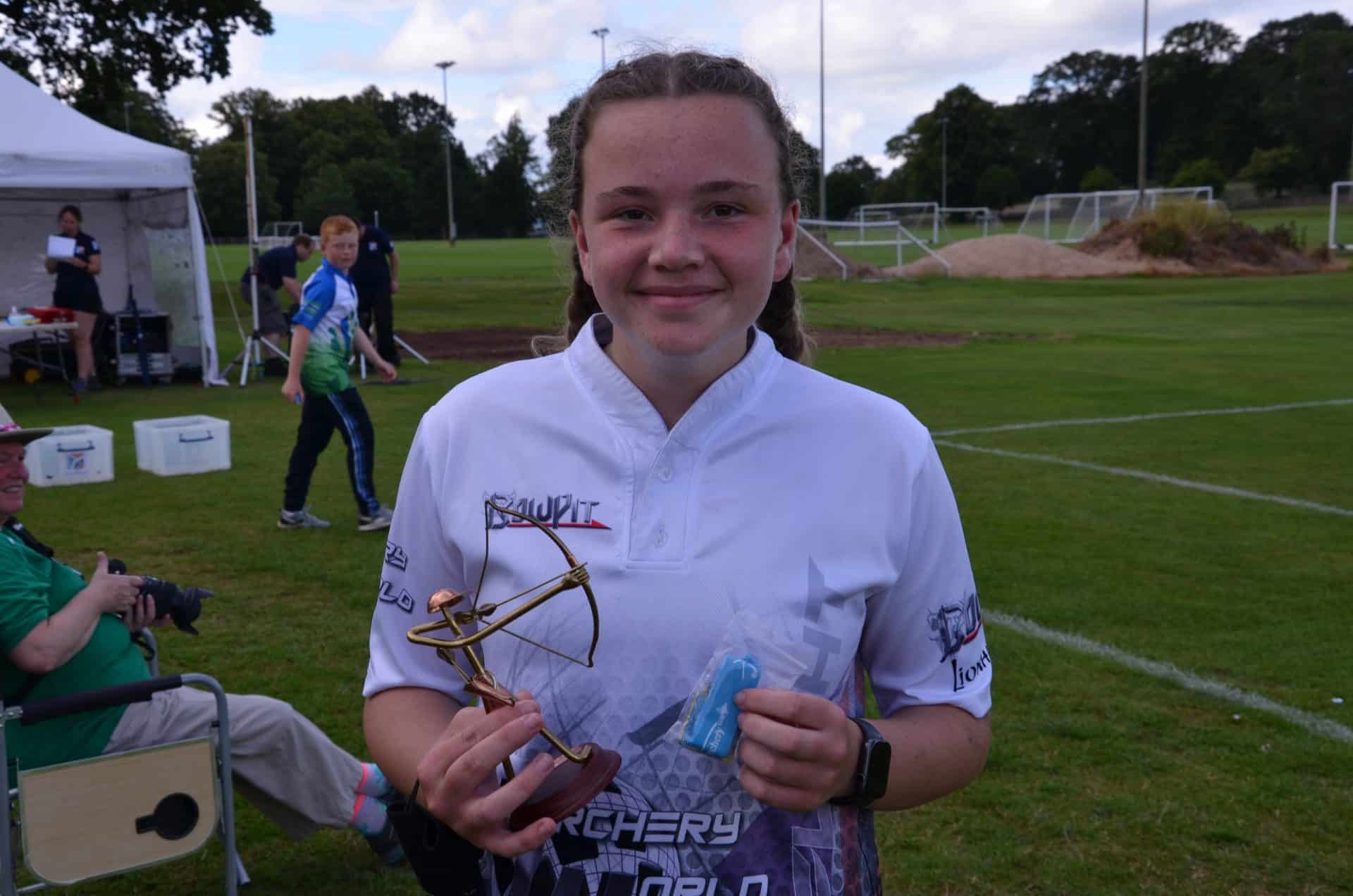 Ian, as Fin's dad, please could you tell us about Fin's new record?

Fin attended York Archers Society Double WA1440/Metrics weekend at the end of August. He shot incredibly well, scoring a new UK record of 1403 out of a maximum of 1440. He managed to follow this up on day 2 with 1400 for a combined total of 2803, also breaking the previous UK record.

What's the secret to Fin's success?

He has had a very successful year and Fin was fortunate to be able to train and shoot throughout the lockdowns at private facilities. This combined with Fin's dedication to a strength & conditioning programme has contributed to his success. In the early stages of the pandemic during a period when he did not shoot, he switched his focus to running and managed to complete his first half marathon in under two hours at 14 years old.

What are Fin's other archery highlights this year?

Are there any records left that he hopes to beat this year or next?

Fin is not focused on breaking records but it is always very nice when it happens. He tries to shoot at the best of his ability whilst having fun.

The best advice we could give to parents of an autistic child is that there are no barriers if you can promote positive encouragement whilst managing your individual child's needs. Fin has several coping mechanisms in place for when he becomes stressed or anxious which work well but did take some time to refine into his natural process. Archery and autism seem to work well together due to the repetitive routine nature of the sport which Fin really thrives upon. Fin has proved that disability is not a barrier and has been supported throughout by Archery GB and local archery clubs.

Congratulations on your records! Please could you describe how they came about?

I first shot a Longbow WA Combined round on 18 December 2019 at the Gronnant Bowmen WA Combined Indoor Tournament, in Rhyl, North Wales and amazingly achieved new WA25 and WA Combined UK junior records of 316 and 574.

My next WA Combined tournament was two months later at the Chorley Combined Indoors Tournament at Bamber Bridge. After the Gronnant shoot I wondered whether I could better my previous two records and also set a new WA18 longbow record. I broke both my WA25 and WA Combined records scoring 328 and 607, though the 18-metre record remained elusive.

I required another 2021 JMB Barebow target classification score to gain my Barebow JMB and entered the GNAM, Wetherby on the 24-25 July 2021, a two-day Double Bristol 3 round. The Double Bristol 3 UK record was 1018. I achieved a new Junior National Record score of 1871 and also achieved a JMB BB score. A very tiring two days of archery but well worth it!

It's quite unusual to have a talent for two bow styles. What do you attribute your success to with each?

I would say that the attribute I have is natural hand-eye co-ordination, therefore it helps me shoot accurately on a consistent basis. I also think that I have gained more mental and physical strength since starting archery, which has contributed to other aspects of my life.

What did you find most challenging about getting back into the sport after lockdown, and how do you think it's changed your game?

The thing I found most challenging after lockdown was the long days at competitions and travelling around the country to compete, which can be tiring. It took a while to rebuild my muscle form. The first competition back after Covid I felt very nervous, but I soon lost those feelings after I started shooting. It's been so good meeting up with my friends at the various competitions.

You've quite a history already as a record breaker! Is it something you actively set out to do?

Yes, I'm very record focused. Since I started archery I've achieved a combination of over 160 County, Regional and National junior records at clout and target shooting both longbow and barebow.

Have you had any other archery highlights this year?

An archery highlight from this year was at the Junior Masters when I was having a difficult time with my shooting during the head to head round (my first), when all my friends were very supportive. It was just a really great environment to be with other archers of different bow styles supporting each other. Other highlights are winning the U16s Barebow National at Lilleshall, the Archery England Junior Clout, setting a new National Junior Clout record and achieving JMB BB classification scores at both clout and target.

Are there any records left that you hope to beat this year or next?

There isn't any one record in particular but I would like to better all of my records that I set the previous year.

Best piece of advice you've ever received from a fellow barebow/longbow archer/coach that might help others?

There are two. If you've had a bad round, put it behind you, forget it and focus on the next round. The best piece of advice I have received is that even if others try and distract you and bring you down with hurtful words, you have to not care what they say and do and just shoot for you, and always do your best not matter what.

You can read the stories of other record breakers in the winter issue of Archery UK.