Ella Gibson took gold and the European Indoor Champion title at the weekend! 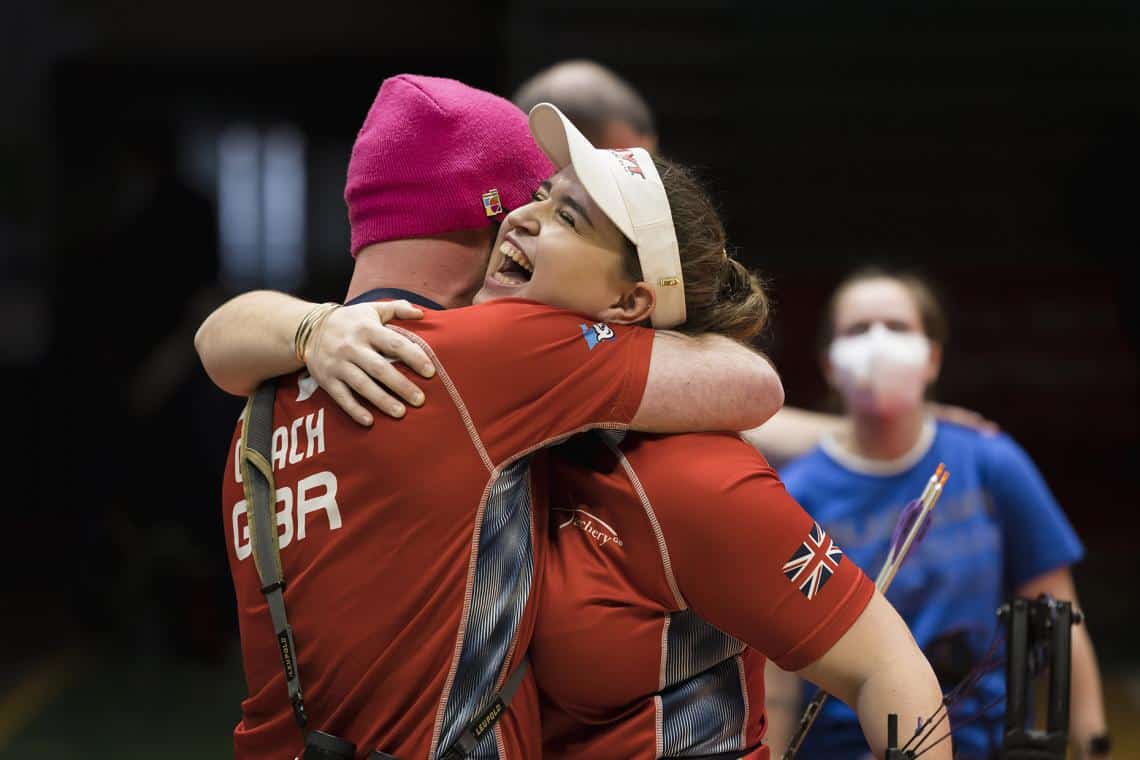 Shooting in Lasko, Slovenia, Ella Gibson brought home the European Indoor Champion title for GB at the weekend. And we couldn't be prouder!

Let's get to know the new European Indoor Champion on a personal basis. We interviewed the compound archer about her life, her journey to success, what's next, and some hints and tips for up and coming compounders.

The very first time I tried archery was in October of 2014 when some coaches from Xperience archery came to my secondary school. Where they put on a 6-week taster session after school. I instantly loved it and was fairly good at it.

So after talking to them, I started a beginners course with Deer Park Archers and joined the club in June 2015, initially shooting a recurve bow. After about a month of shooting one of the coaches in the club asked if I would be willing to shoot barebow for an upcoming regional competition. All because they were short of barebows in the county team.

I figured, why not! I changed to barebow and practiced for the next 6 weeks before the competition and came 2nd. That definitely hooked me on winning. It was then suggested to stick with it for some following competitions and the Junior Indoor Nationals, and I kept striving to win.

After that, I just never turned back to recurve. A year and a half went by in which time I become National Champion a few times and broke some national records. At the end of 2016, I decided I wanted more, I wanted to shoot for GB.

I spoke to the coaches in my club and they told me that with barebow I could only do this at field archery. I tried it, looked at the target, guessed the distance and epically failed. Deciding that field was definitely not an option for me. I spoke to the coaches again and was told that I was middle-aged to start recurve now (I was 16) and would be better off going to compound. All I really needed for that was strength and some hard work to get there.

I decided to make the change, buying my first kit just a few days before Christmas and shooting my first competition on the 1st of January 2017. 1 Year later I shot for GB for the first time at the World Indoor Championships in Yankton (February 2018). And the following year had made the senior team, winning my first senior medals. These included 3 World Cup medals with the team in 2019.

Since then I haven't looked back and worked on pushing myself each day to achieve what I want.

How does it feel to have won your first individual international medal?

It feels incredible to win the European Indoor Championships. It feels like I have been trying to get there for so long and have just fallen short too many times and seen too many silver or bronze medals from us. I just really wanted to see that gold. It's great to know the work I have been putting in has started to pay off. I really can't wait to get back to it and see what I can make of this next outdoor season.

Tell us about your match, how did you feel during it?

My Finals match was something I have never experienced before. I have experiences nerves and shaky arms, a heartbeat in your head and feeling like you can't breathe. But I've never felt my actual knees shake like I was standing on a wobble board.

So that was definitely different! Every time I managed to calm myself down between ends, by the time I got to my third arrow I was full-on shaking again! Definitely, a lot to learn from that and practice but it was still an amazing experience. I know I could have shot a lot better but in the end, I did enough to win and that's all I needed that day.

What has got you to this point?

Hard work, determination and a want to understand and learn as much as I can from as many people as I can. Not to mention the huge amount of support that my family, coach and sponsors have given me.

What are your goals for the year ahead?

This outdoor season I want to increase my world ranking into the top 10. And hopefully, make some more individual medal matches!

How do you think the new factory will help with your training?

Ella Gibson's family own and run Dolcetti Ice Cream, in Cirencester. They are moving to bigger premises, which will have a 25-metre indoor range.

I think the new factory will help a lot with the setup and tuning of my bows and enormously for the indoor season. Being able to shoot however long I want at whatever time of day I want is invaluable. Not to mention that it means I will have somewhere I can shoot when the British weather is unbearable. I think I will be able to get 25m in my new range which will mean I can do some great 50m simulated shooting inside when the weather gets rough.

How do you get ready for the outdoor season after a long indoor season?

The first thing I am doing after a really hectic indoor season is actually taking a few days' break. Only 3 to give my mind and body a rest from all the nerves, travel and constantly needing to be on it. I then will start my set-up for the outdoors. Starting with some new strings from Reign Bowstrings and getting a basic tune on my bow before taking it out to 50m. Then seeing how it shoots before adjusting some more, I will also be re-starting my Strength and Conditioning while I am in the UK for a while. Just to keep my body in a strong and injury-free state.

Ella Gibson's tips for up and coming archers

There is no shortcut to being competitive. Work hard and put in the time behind the bow. There really is no substitute for practicing. A good coach and a good bow set-up go a long way. But at the end of the day it's all down to you.

Try and not become reliant on any person. Instead, learn from them as much as you can because you never know what will happen in the future. It's always best to be able to be self-sufficient, so learn about your bow and your kit. But also film yourself. Watch it back and study learning about your own shooting. Along with the changes that you want to make and are working on.