Monty Orton of the Under 21 Recurve Men category will shoot for gold, and Under 21 Compound Woman Grace Chappell will shoot for bronze at the individual finals of the 2022 European Youth Championships. 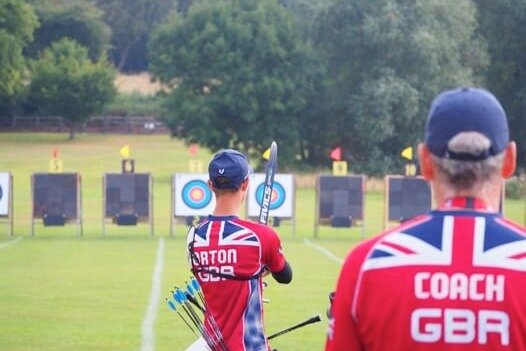 Having ranked 3rd in the qualification, Monty Orton earned himself a bye in the 1/24 round of the eliminations. His first match was in the 1/16 against France’s Thomas Strock-Huttepain. Monty took the first end points with 27 points to 23, and then Strock-Huttepain took the next two end wins with a 28 and a 29. The Brit came back with a 29 and then a 27 to the French archer’s 23 and 24 to take the match 6-4.

Next up for Monty was the 1/8 match against the 2022 European Youth Cup Champion, Yaël Smeets from the Netherlands. Monty took the first end with a 28 to Smeets’s 27, and then the Dutch archer took the second end with a 29 to Monty’s 26. Monty then shot a 26 end to match the match to 4-2, but in the forth end Smeets shot a perfect 30 to equal out the points 4-4. In the final end, it was Monty who held her nerve to take the win 6-4 with a 27 to Smeets’s 22.

“The matches went well and I read the wind well with the aiming off. I just kept it smooth and moving and the rest just happened by itself,” Monty told us.

In the quarter finals, Monty met 11th ranked Nicolas Bernardi from France. The French archer took the first end with a 28 to Monty’s 27, and then it was Monty’s turn to take the second end with 28-27. Bernardi shot a strong 29 to win the points for the third end, and then the forth end was tied with both archers shooting a 28. Monty managed to take the last end with a 29 to bring the match to a shoot-off where he shot a 9 to Bernardi’s 8 to take the win.

“It feels good to shoot on home turf and to be shooting for the title. I’m going to go out and shoot my best to try get the title, especially as it’s on home turf,” Monty said.

Next in the 1/8 round, Grace faced the 8th ranked Turkish archer, Ipek Tomruk. After two ends, both archers were tied on an impressive 59 points each. In the third end, they both shot a 29, keeping the scores all square on 88 apiece. The women kept drilling the tens, once against tying on score, this time with perfect 30s. In the final end, the archers continued to match each other arrow for arrow, taking the match to an inevitable shoot-off. Grace held her nerve, shooting a 10 to the Turkish archer’s 8 to move into the next round.

For the quarter finals, Grace then had to face Andrea Munoz, the 19th world-ranked archer from Spain. Grace started strong with a 29 to Munoz’s 27, and then she shot a perfect 30 to the Spaniard’s 28. Both archers shot a 28 in the third end, keeping Grace’s lead to a four points advantage. Munoz then found her feet, shooting a 30 to Grace’s 29 to bring back one point from her deficit. Another 30 to finish the match from Munoz brought her within a point of overtaking Grace. But it wasn’t enough from the Spanish archer, and Grace took the win 144-143.

In the semi-finals, Grace shot against 5th ranked Hazal Burun from Türkiye. The archers both opened with a 28, following a 30 from the Turkish archer to Grace’s 29. Grace stayed consistent throughout the match, shooting a string of three 28 ends. However, it was not enough to keep up with Burun’s 29, 30, 29 ends. Grace lost the match with 141-146, but she earned her space in Saturday’s live bronze medal match.

“I thought the matches were really high quality today. I was extremely happy with my 147 and a 10 in that shoot off to get into the quarter finals. I’m really happy to be in the bronze match, especially at Lilleshall. I didn’t expect it and I am just hoping to shoot my best on the finals field and I’m happy with whatever outcome,” Grace said.