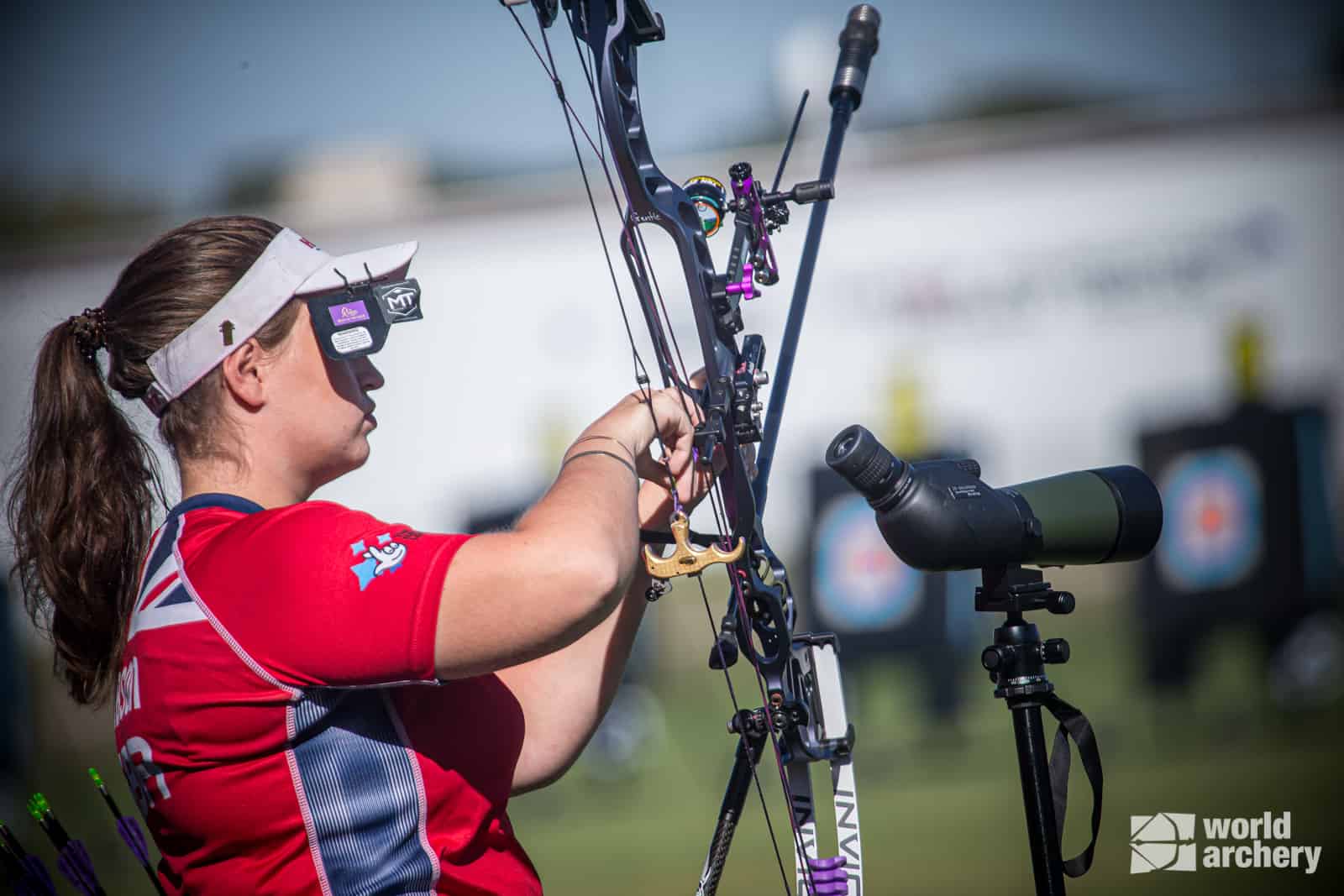 The GB compound men competed in the first round of eliminations with the 1/48. Against the Mongolian archer, Adam Ravenscroft scored 146-143 to take the win. Adam Carpenter won with an impressive 149, one point away from a perfect score, gaining a 33 point lead over his opponent's 116. Down the line, James Mason also won his match with a 145 to the 143 points shot by his opponent from Kazakhstan.
In the 1/24 round, Adam Ravenscroft lost to the French archer, Jean Philippe Boulch, 149-144. Adam Carpenter's 146 was not enough to beat the 149 shot by the archer from Israel. James Mason was also beaten with a 149, this time by the Italian Elia Fregnan, to Mason's 147.

For the compound women's 1/24 round, I [Izzy Carpenter] was leading my match by a point, however lost in the final end to Muskan Kirar of India 144-142. A few targets down, Layla Annison narrowly missed out on a 1/16 round spot with the German woman beating her 144 points to 143. Having had two bye rounds, Ella Gibson's first match was the 1/16 against Yun Soo Song of Korea. It came down to the last end where the Korean shot a perfect 30 to take the match 146-144.

In the 1/48 round for the recurve men, James Woodgate lost to his Turkish opponent, 6-2. Tom Hall shot straight sets 6-0 to take the win from the Hungarian archer. Patrick Huston also won  his match 7-1 against the archer from Saudi Arabia. Up next in the 1/24, Tom Hall beat Ivan Kozhokar of Ukraine 7-3. Patrick Huston took his match to a shoot off against the archer from Puerto Rico, shooting a 10 to his opponent's 7. In the 1/16 round, Tom Hall unfortunately lost 6-2 to the 5th ranked archer from Spain. Patrick Huston was able to beat Weckmueller from Germany 6-4 to take him to the 1/8 round. Huston then met Olympic champion, Mete Gazoz, where unfortunately he lost 6-2.

For the women's 1/48, Penny Healey shot straight sets against her Austrian opponent to take the match. Bryony Pitman and Yulia Larkins joined in the next round for the 1/24. Unfortunately, Healey lost her next match to Marie Horackova from Czech Republic 7-3. Bryony Pitman won her match 6-2 against her Brazilian opponent while Yulia Larkins won her match 6-4. In the 1/16, Pitman shot straight sets 6-0 against her Canadian opponent to take her to the 1/8 round. Unfortunately, Larkins lost 6-0 against 6th ranked Lisa Barbelin of France. In the 1/8 round, Pitman faced 3rd ranked Korean archer Minhee Jang where she sadly lost 6-4.