The individual matches have begun at the 2022 Indoor European Championships in Lasko, Slovenia. 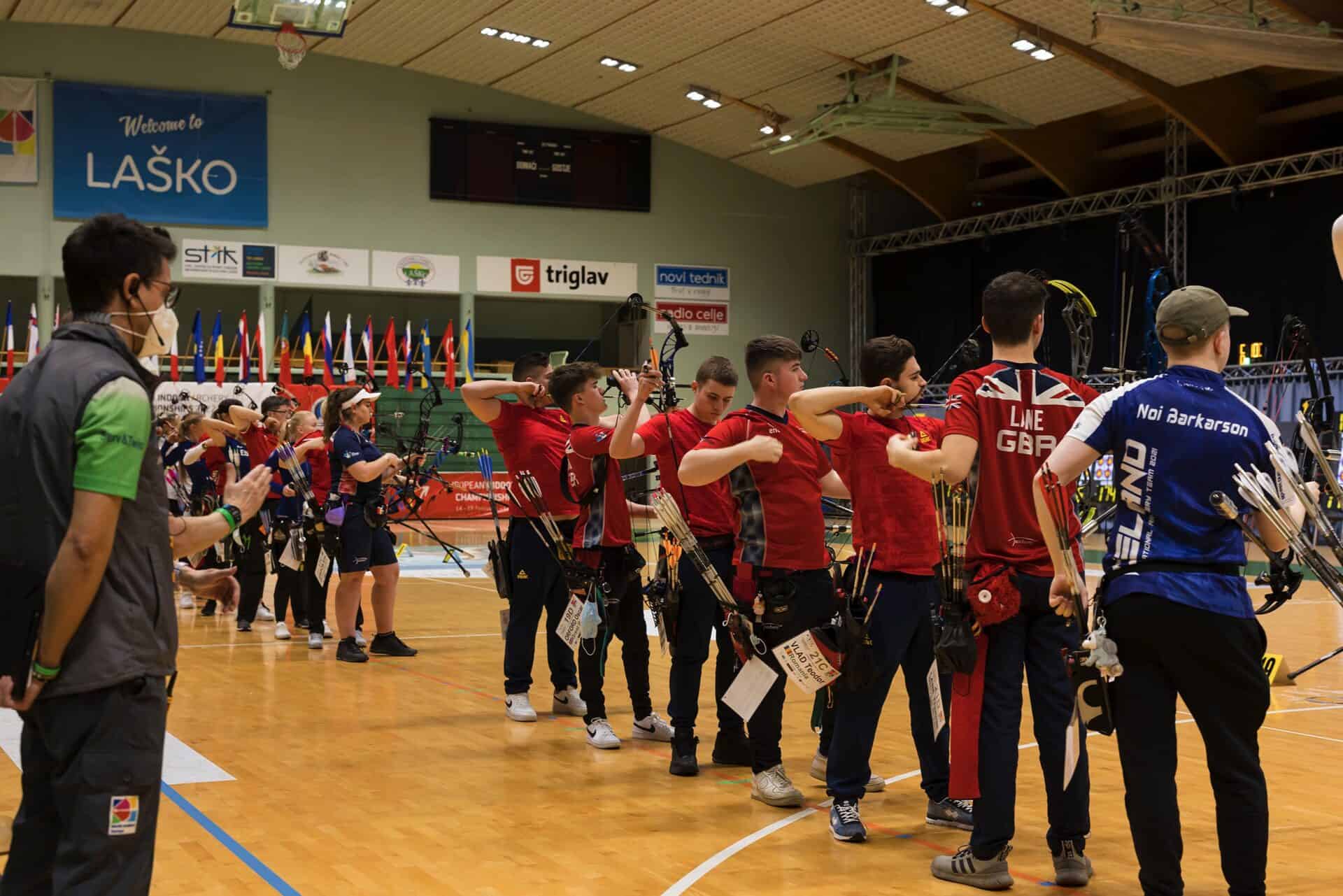 After a flying start in the qualifications, number one seed, Oliver Hicks has earned a place in the quarter finals which will take place tomorrow, Thursday 7th. He had a bye in the 1/16th round, and then he faced Oleg Tsybikzhapov from Russia in the 1/8 where he won 6-2. Oliver will shoot against Joakim Hassila, the 2018 Indoor and Outdoor Barebow Masters World champion.

The barebow under 21 women, Kathryn Morton and Amelia Chumber, will shoot their first round tomorrow.

Lone GB compound man, Stuart Taylor, has made it all the way through to the quarter finals. To get there he shot 147 against his Finnish opponent in the 1/16 round, and then a 148 in the 1/8 against Viviano Mior of Italy. In the quarter final, Stuart will face French archer and 9th ranked in the world, Jean Philippe Boulch, for a chance to get to the semis.

For the compound women, Ella Gibson has also made it to tomorrow's quarter final. She shot a perfect 150 in the 1/16 round, and then in the 1/8 she shot 146-141 against Ukraine's Olga Khomutovska. Next, she will shoot against Estonia's Maris Tetsmann.

In the under 21 men's category, Thomas Lane unfortunately lost his match by one point, 146-145 against Leonardo Covre of Italy.
Lewis Haslam took his first match win, shooting a 145 to his opponent's 142. In the 1/8 round, Lewis and Denmark's Christoffer Berg both shot 145, and it came down to a shoot off. The archers each shot a ten, but sadly Lewis's arrow was not enough to take the win.
Oscar Orford shot a 148 in the 1/16 round, taking the match by one point. Oscar then faced Croatia's Aljaz Matija Brenk, but his 143 was not enough to beat his opponent's almost perfect score of 149.

As for the under 21 compound women, Jenny Bryan had a bye in the 1/16 round. In her first match, Jenny shot 142 points, however her Danish opponent took the match with a 144.
Grace Chappell also had a bye in the first round. In the 1/8th, she was also beaten by a two point margin, 143-141, against the Icelandic archer Anna Maria Alfreðsdóttir.
Patience Wood shot a 145 in her first round to take the match by three points. However, in the 1/8 round, Patience lost to Hazal Burun of Turkey, 143 to a near perfect 149.

GB's one recurve man, Tom Hall, has successfully earned a spot in the quarter finals. He first faced Oskar Kasprowski from Poland in the 1/16 round. The match went to a shoot off where both archers shot a ten, but Tom's arrow was closer to the centre. Next, he shot against Mete Gazoz from Turkey, the 2020 Tokyo Olympic Champion. Arguably the biggest upset of the day, Tom smashed the match, knocking out the gold medalist, 6-2 set points. In the quarter finals, Tom will meet 11th ranked archer, Florian Faber of Switzerland.

For the recurve woman, Jaspreet Sagoo will also be competing in tomorrow's quarter final. In her first match, Jaspreet took the win from Gajane Bottinelli of Finland, 6-2. Next, Jaspreet faced Russia's Mylnikova Valeriya, where she shot another 6-2 match to earn herself a quarter final spot. Jaspreet is set to shoot against two-time Olympian, Anastasia Pavlova of Ukraine.