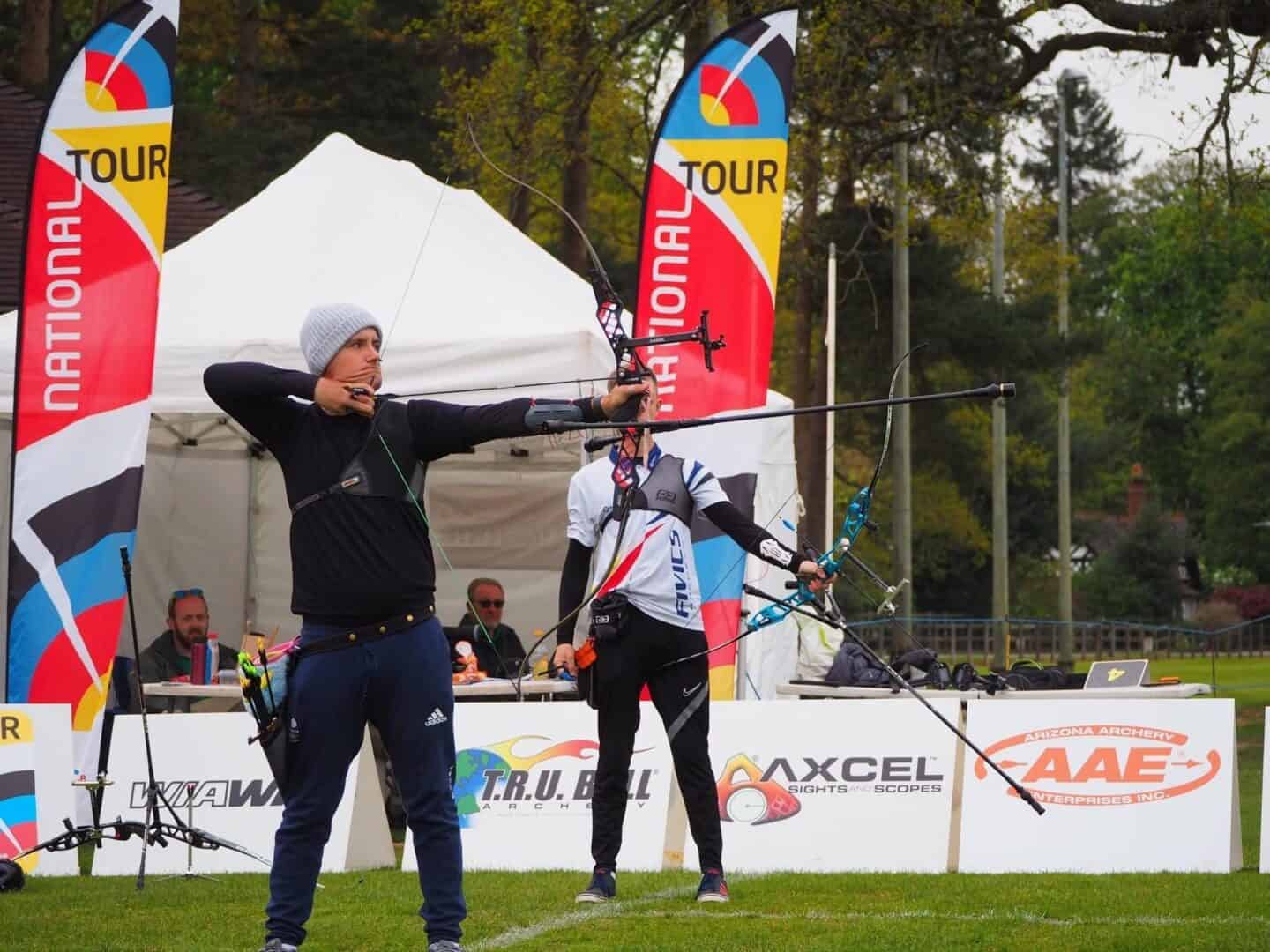 The UK's biggest event of the year is back, the National Tour, and it all kicked off with stage one at Bucks or Bounty. Lilleshall was kind to our archers today, the sun shining as the archers shot their WA720 qualifying round.

There was a lot at stake at this tournament, not just the anticipation of who will be the winners, but also for the juniors in particular. This year the youth athletes for both compound and recurve have a handful of events which collate towards their GB Team selection process. Bucks and Bounty is the very first of these competitions which will go towards deciding who will be representing GB at the European Youth Championships held at our very own Lilleshall venue this summer.

The barebow finalists for the women after two rounds of head-to-heads were first seed Helen Brown, along with Kim Doherty, Kirsten Shoesmith and Victoria Williams. This is the first year that barebow has been included into the competitive categories for the National Tour.

For the bronze medal match, Williams faced Shoesmith. Shoesmith took an end to find her footing, losing the first set to Williams, but she quickly came back to draw the next set. End four went in Shoesmith's favour, and she needed to win the last set in order to stay in the game. However, it was Williams who took the last two points with a 25 scoring end to take the win 7-3.

Bucks and Bounty's organisers switched things up a bit regarding the finals. The bronze finals were completed on the main field as the matches running up to it were, however, the gold finals were shot on a finals field simulated area. The archers were brought out onto the field of play with their coaches, should they have chosen to have one, and the match was shot in alternating arrows as it would if they were competing internationally. The audience and other archers were able to watch from the sidelines as each arrow was called out over the microphone.

Brown and Doherty opened the first match of the finals for the women's gold medal. The first end was 20-17 in Doherty's favour, giving her the lead. Brown came back stronger with a 23, however Doherty's 27 earned her another two set points. Brown needed to win this end to be in with a chance. She put down yet another improved end with a 25, but Doherty responded with a 28 to take the win with straights sets, 6-0.

"Shocked, happy, nervous, excited, are just a few of the emotions I felt approaching my first head-to-head at the first National Tour to feature barebow. It was both a daunting and an amazing experience, and big thanks to the judges for thoroughly explaining how it was all going to work. Now sad it's all over and hopeful of getting the chance to do it all again!" Doherty told us.

For the barebow men, the final four were first seed James Annall, as well as Ralph Barwise, Michael Lovell and John Walsh.

In the battle for bronze, 5th ranked Lovell met 3rd ranked Walsh. Lovell opened strong with a 26 to Walsh's 20 to take an early lead. The next end was a little closer, 23 versus 22, but again it was Lovell took the points. Walsh responded with a 25 end to take the third end. Lovell needed two more points to take the win, and he did, 20 points to Walsh's 19 was enough to take the match 6-2.

As for the gold final, Annall's battle to stay in the top spot put him against 2nd seeded Barwise. The standard of the match skyrocketed, neither archer giving in without a fight. Barwise took the first end, 27-26, but Annall shot another two 26 ends to gain the next four points. In end four, Annall dropped a 19, giving Barwise the opening to take the points with a 24. In the end, Annall was able to continue his winning streak from the morning, shooting a 27 to Barwise's 26, earning himself the title and the medal with 6 set points to 4.

"It's my first time doing the National Tour because barebow has been included for the first time. It's a lot different, and I haven't had to do alternate shooting before, Annall told us.

Going for the bronze were world-ranked number 9 Prieels, and seventeen-year-old  Boulton. Both women opened strong with a 29 for Prieels and a 28 for Boulton. Prieels shot another 29 to Boulton's 25, giving herself a comfortable five point lead after two ends. Boulton found her footing, shooting 28, 29 and 27 for the last of the five ends. However this was not enough to catch up to Prieels, who shot 141 to Boulton's 137 to take the bronze.

In the gold final, 1st and 2nd seed archers and GB teammates Gibson and Carpenter met. The women drew their first end with 28 apiece. In end two, Gibson scored a 26 which Carpenter responded to with a 30, giving herself a four point lead. Gibson and Carpenter then tied again on 30 points, Carpenter still retaining her advantage. End four saw Gibson shoot another 30 to Carpenter's 29, gaining one point back from her teammate. With one end to go, Carpenter shot a 29 and Gibson a 27. The finals scores were 146-141 in Carpenter's favour, earning herself the gold medal.

"I couldn't be happier with today's results. The shots were flowing and feeling great, and to finish on a 146 to get the gold is amazing. It was great to be shooting on a finals field again, and it really added to the nerves and the adrenaline of it all," Carpenter said.

On the men's side, the finalists were seasoned shooters Neil Bridgewater, James Mason, Carl Richards and Nathan MacQueen.

In the fight for bronze, 4th ranked Richards met GB Para athlete MacQueen. After two ends, Richards was leading with 59 to MacQueen's 58. In end three, Richards capitalised on MacQueen's 27 end, shooting a 3o to gain a four point advantage. MacQueen finished off with a strong 29 and 30, however Richards kept his lead to take the match with 148 to MacQueen's 144.

In the gold final, two GB experienced shooting faced, Mason and Bridgewater. Bridgewater opened with a 27 to Mason's 29, and then quickly followed this with 29 apiece in end two. Mason shot a 30 in the third end to gain another point over Bridgewater, extending his lead 88-85. In the final six arrows, Mason only dropped one more point to Bridgewater's three. In the end, it was a five point difference between Mason and Bridgewater, winning him the gold with 147-142.

"Qualification was a bit of a nightmare, and I realised fairly early that my best hope was to make some changes. I got the bow feeling better, but it left me in a tough part of the brackets, and I never really expected to make the finals. I'm very happy to have picked up the win, and hopefully it's the first of many this year," Mason said.

For the under 18 women bronze final, 2nd seeded Emelia Hughes met 1st seeded Holly Linfield. Hughes opened with a 26 to Linfield's 21 to take the first end. Linfield raised her game for the next two ends with 22 and 25, but Hughes wasn't letting any points slip. Hughes too the match with straight sets 6-0.
And for the gold, 3rd ranked Alia Fallouh faced off against 4th ranked Megan Havers. The first set went to Fallouh with 28 to 26, and the next two ends were both tied on 23s and then 22s. In the last end, Fallouh's 25 beat Haver's 23 to take the gold medal with 6-2.

The under 18 men bronze match saw 3rd ranked Archie Bromley meet 1st seeded Jack Doherty. End one was tied with 28 each, and end two went to Doherty with another 28 end. Two points behind, Bromley shot 24, 27 and 25 to take the next six set points in a row, winning 7-3.
As for the gold, 5th ranked Edward Gray faced 2nd ranked William Liversidge. Gray secured an early lead with 28 ends to take the first four set points. Liversidge came back with a 27 to take the third end, but Gray followed this with another 28 in end four. The match went to Gray, winning him the title with 6 set points to 2.

For the women, the final four were 1st seeded Bryony Pitman, alongside Penny Healey, Malgorzata Sobieraj, and Yulia Larkins.

In the bronze medal match, 4th ranked Sobieraj met 6th ranked Larkins. The women drew their first end with 23 each. Following this, Sobieraj didn't let another set point slip in the favour of her opponant Larkins. Sobieraj shot two 28s ends and a 29 to finish,  winning the match 7-1.
The gold medal match saw the GB Team's finest face off, Olympian Pitman and World Indoor Series winner Healey. Healey took end one with 27 to Pitman's 26. Pitman was consistent, shooting another 26 and a 25 in ends two and three. However, this was enough to take back any points, as Healey shot a 27 and a perfect 30 to finish. It was a game of straight set wins in Healey's favour, where she took first place with 6-0 over teammate Pitman.

"It felt really good to come out to the first National Tour stage and win it. This win will help with my confidence for the rest of the season, Healey said.

Going for bronze were 8th ranked Davies and 2nd ranked Cheung. Cheung took the lead after the first two ends with 4 set points to 0. Davies came back with two 29s in end three and four to bring the set point equal at 4-4. The last end would determine the winner, however the men tied with 27 each, taking the match to a shoot off. Davies put in a nine, however it wasn't enough to beat Cheung's X for the win.

The last match of the day was the gold final which saw 2020 Olympic reserve Wise and 4th ranked Orton battle it out. Orton took end one, followed by Wise taking end two. In the third end, Orton shot a 28 to Wise's 27 to bring the match to 4-2. Wise responded by putting in two perfect 30s in ends four and five to Orton's 27s. It was Wise who was victorious, taking the match and the gold medal with 6 set points to 4 over Orton.

"It feels great to win the first national tournament of the year. I didn't shoot too great in qualifying, but around the quarter final I found my groove. I shot great, clinching the gold with two 30s on the finals field. Hopefully the start of a very successful domestic season!" Wise told us.