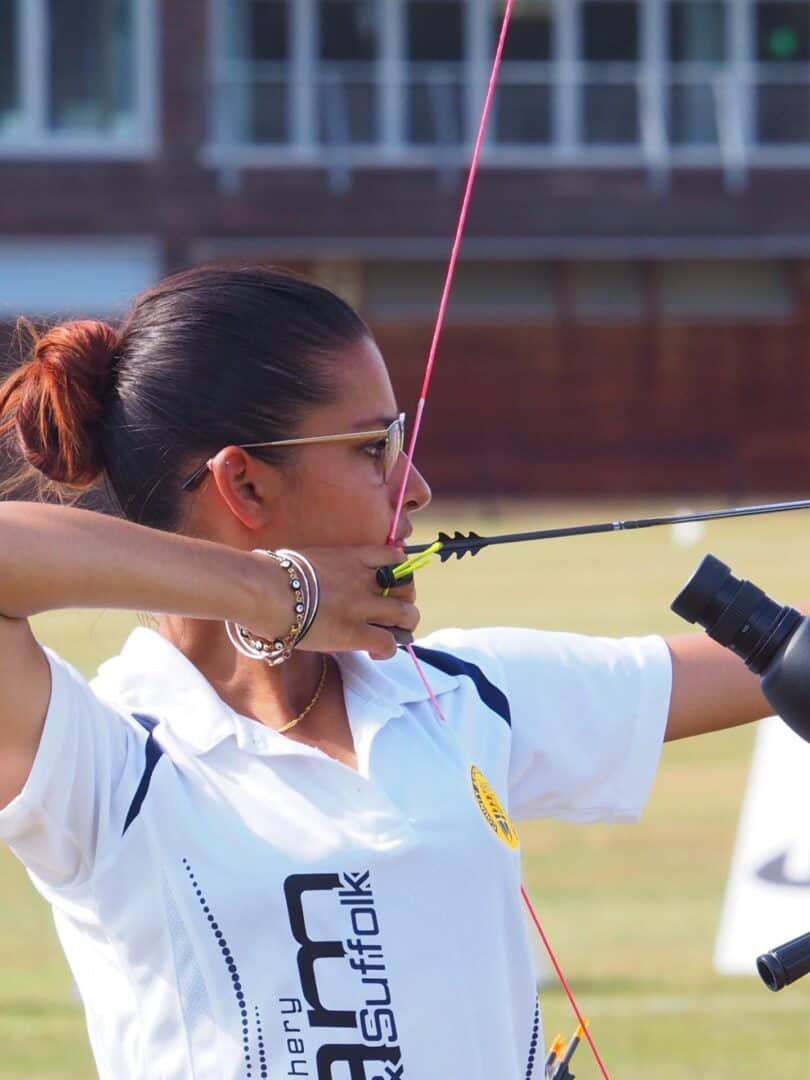 The Surrey stage of the National Tour turned out to be a hot one for the archers competing there. They completed their WA720 qualification round and then a string of head-to-head matches to determine the winners of each category.

Penny Healey took the top ranking spot for the recurve women with 653. When it came to the eliminations, Healey was knocked out in the 1/8th by Hannah Burnage who then continued to make the final four. Burnage was joined in the top four by Malgorzata Sobieraj, Jaspreet Sagoo and Sarah Bettles.

In the bronze final, 3rd ranked Bettles met 17th ranked Burnage where Bettles stormed ahead from the start, taking the win with straight sets 6-0.
Going for gold, Sagoo and Sobieraj had a close match. Sagoo took the first two ends to take it to 4-0, and then both women tied the third end on 24 points each to bring it to 5-1.Â Sobieraj came back with a 29 to take the fourth end, but Sagoo then took the fifth end, winning her the match 7-3.

Â"Surrey was a little bit of a challenge with the wind and heat, but I'm glad I pushed through to get the big win!Â” Jaspreet Sagoo said.

For the recurve men, James Woodgate topped the qualification with 663 points. The top four archers going into the finals alongside Woodgate were Monty Orton, Conor Hall and Tom Hall.

Woodgate was beaten in the semi-finals of the eliminations by Orton, putting him in the bronze medal match to face Tom Hall. Woodgate took the first end, and then the second end was tied on 27 points apiece, taking it to 3-1. Hall shot a perfect 30 in the third end as well as the forth end, taking the lead on 5-3. The last end was a tie on 27 points each which was all Hall needed to take the bronze medal 6-4.

In the gold medal final, 4th ranked Orton faced 2nd ranked Conor Hall. Orton took the first end with 27 points to Hall's 26. Hall then came back fighting to take the next two ends, bringing the match to a close 4-2 . In the final end, Orton shot a strong 28, but it was not enough to beat Hall's perfect 30. Conor Hall took the win for the recurve men's category 6-2.

Â"It always feels good to win. Winning Surrey has really taken some of the pressure off Evesham so I can go and just enjoy it. And if I manage to make it to the podium or even win again that'll be a bonus,Â” Conor Hall said.

Layla Annison took the compound women's ranking top spot with 690 points. Annison was joined in the final four along with Lizzie Foster, Grace Chappell and myself, Izzy Carpenter.

In the bronze final, 4th ranked Chappell met 6th ranked Foster. Chappell opened strong with a 30 to Foster's 29, and then both women shot a 29 in the second end. Foster came back with a 30 in the third end to Chappell's 27 to take a two point advantage. Chappell brought back one point in the fourth end, giving Foster only a one point lead going into the final three arrows. In the end, Foster shot a 29 to Chappell's 27, taking the win 145-142.

1st seed Annison met myself, who ranked just below her after qualification with 689 points, in the gold medal final. After the first two ends, Annison had a one point advantage with 58 to my 57. End number three and four saw two 28s from me and two 27s from Annison, switching the one point lead in my favour. The final end had us both finishing on a 29, meaning that I took the gold medal with 142 points to Annison's 141.

For the compound men, Adam Carpenter topped the ranking table with a 702. He was joined in the final four men after the eliminations by Adam Ravenscroft, Carl Richards and Neil Bridgewater.

In the bronze final, top seed Carpenter met second seed Bridgewater. The men opened strong, both shooting a 30 to begin the match. Bridgewater shot a 28 to Carpenter's 29 in the second end to take a one point lead. They then tied the third and fourth end with two lots of 29s apiece, Bridgewater still with the one point advantage. It all came down to the final three arrows each, and Carpenter shot a perfect 30 to Bridgewater's 28 to take the bronze medal.

Going for the gold, 3rd ranked Richards met 4th ranked Ravenscroft. They also had a very tight match to determine the overall compound men's winner. Ravenscroft shot a 30 to Richards's 29 in the first end, and then they both shot 29s for the second and third ends. The fourth end was yet another tie, this time with two perfect 30s from both men. In the last end, Richards produced another 3o to Ravenscroft's 29 to take the match to an inevitable shoot-off. Ravenscroft shot a clean X to Richards's 9 to take the gold medal.

Â"Carl and I have shot together since he started shooting. It's an even match which was shown with it going to a one arrow shoot-off. It's always a good feeling to get the win regardless of it being the first match of the day or the last,Â” Adam Ravenscroft said.

Amelia Chumber ranked 1st for the barebow women with 563 points. She was joined in the final four by Karen Lott, Nikki Ledwick and Ilia Sediq.
In the bid for bronze, 3rd rankedÂ Sediq faced 5th ranked Ledwick. Sediq opened with a 25 to Ledwick's 21 to take the first end, and then Ledwick came back to take the second end with 22 points to 21. The third end went back to Sediq, and then the fourth end was won by Ledwick, bringing the set points to an equal 4-4. In the final end, Sediq shot a strong 27 to take the bronze medal win 6-4.

1st ranked Chumber met 2nd ranked Lott in the gold medal final. Lott opened with a 23 to Chumber's 13 to take the first two set points, and the second end went to Chumber with 24-19. The third end was close with Lott shooting a 19 points to Chumber's 18. Taking the match 4 all with one end to go, Chumber shot a 25 to 23. In the deciding end, it was Chumber who shot a 22 to take the gold medal.

For the barebow men, Mark Turner shot a 577 to take the top spot after the qualification. In the top four alongside Turner wasÂ Thomas Williams, WilcoÂ van Kleef-Bolton and Chris Hague.

4th ranked Williams beat 1st ranked Turner in the semi-finals, sending Turner into the bronze final. In the fight for 3rd place, Turner faced Hague where he won the first end set points. The second end was close, this time it was Hague who won the points with 25-24. In the third end, Turner shot a strong 28 to take the set points to 4-2. Hague came back fighting, shooting a 24 in the forth end and a 27 in the fifth end to win the match 6-4.