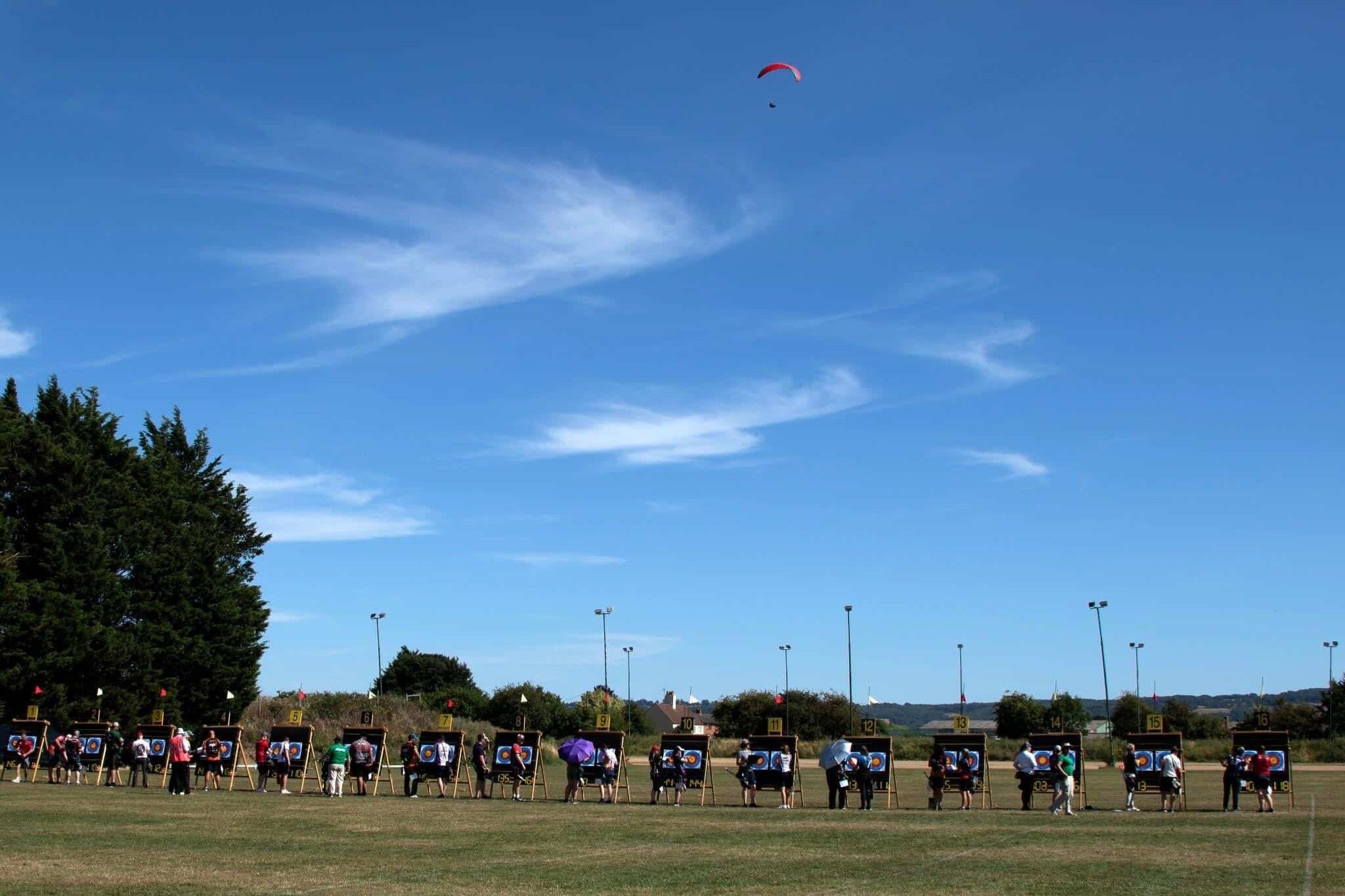 A very warm and still Evesham played host to the final stage of the National Tour for 2022.
On Saturday, Alex Wise took the top spot in recurve men’s category after qualification with a score of 663.
After the head-to-head eliminations, the last four men standing going into the medal matches were 1st ranked Alex Wise, 2nd ranked James Woodgate, 12th ranked Keith Harding, and Roger Castillo-Alquezar who finished in 14th place.

In the bronze final, Keith Harding faced Roger Castillo-Alquezar. The two men tied each other in end one and end two with 27s and 25s. Keith shot a 27 in end three to Roger’s 25 to take the set points to 4-2. And in the final end, the archer’s mimicked their previous end with Keith shooting a 27 and Roger a 25, winning Keith the bronze 6-2.

Alex Wise and James Woodgate met for the gold final for the recurve men. James took the first set points with 29 to Alex’s 27. Alex then responded with a 30 to James’s 27 to equal out the set points 2-2. The third end was tied of 27 apiece to take the points to 3-3. Another 30 from Alex took the fourth end, and James came back with a 30 of his own in the last end to take the match to a tie. In the shoot-off, it was James who came out on top, shooting a ten to Alex’s eight to take the gold.

“The unexpected heat for me was absolutely fine because I have just come back from Romania where I was in 35+ degree heat all of last week. So it has actually been quite easy for me and quite normal to come back to this heat. I just kept hydrated really, that’s all I did. Bar the first couple of National Tour stages, one of which I didn’t attend, they've gone really well. I placed really well in qualifying and made the top four at the last three, so I’m really happy with how the season has ended. I’m excited for the European Youth Championships next week, I’m really trying to push for that international medal now. It would be my first. I've got a little bit of nerves, but I'm hoping to get in a good place over the next week," James Woodgate said.

After the 2022 stages, the recurve men who have finished within the top 8 and will therefore be able to attend the National Tour Finals are:

On the women’s side, Bryony Pitman topped the ranking table for the recurve women with 665.
The final four women left after the individual eliminations were 1st ranked Bryony Pitman, 4th ranked Penny Healey, 3rd ranked Sarah Bettles, and Jaspreet Sagoo who finished up in 2nd.

Going for gold, Penny Healey met Sarah Bettles. The first end was won by Penny with 27 points to Sarah’s 25. The two women then tied the second end with 26 apiece. Sarah shot a 29 in the third end to take the set points to 3 all. Penny shot a 28 in the fourth end to take back a lead with 5 set points to 3. Both women shot 28 apiece to award them one set point each which was enough for Penny to take the gold 6-4.

“Qualification wasn’t my best, obviously head-to-heads were a lot better. I focused a lot more. I felt a bit of pressure because I have done so well internationally this season. And then coming back, technically it should be easier, but it really isn't. Every head-to-head is really hard, the standard in this country has gone up so much," Penny Healey said.

The recurve women who have finished within the top 8, earning their place in the National Tour Finals are:

The top spot after qualification for the compound men was taken by Neil Bridgewater with a 701.
After the elimination rounds, the final four men who competed in the medal matches were 1st ranked Neil Bridgewater, 5th ranked James Mason, 2nd ranked Kai Thomas-Prause, and 6th ranked Ajay Scott.

Going into the bronze final were Neil Bridgewater and Ajay Acott. Ajay took an early lead by shooting a 28 to Neil’s 25 in the first end. The second end was tied on 28 each, keeping the score difference at only three points, 56-53. Neil came back with a perfect 30 in the third end to Ajay’s 29 to bring back a point from his deficit. In the fourth end, Neil shot a 29 to Ajay’s 27 to bring the match all square on 112 apiece. In the deciding fifth end, Ajay pipped Neil to the win by a single point with 141-140 to take the bronze.

In the bid for gold, James Mason and Kai Thomas-Prause fought it out. Kai shot a 29 to James’s 28 in the first end, and then both men tied the second end with 30 point each. James shot another 30 to Kai’s 29 to bring the match all equal on 88 each. In the fourth end, James overtook Kai by one point by shooting a 29 to Kai’s 28. It all came down to the last end which was tied on 29 apiece, earning James the gold medal with 146-145.

"The day was interesting to be honest. It was tricky weather considering it looked flat calm and it was quite warm, but we all seemed to struggle and no body shot as well as we should've done. I qualified okay and the matches went pretty similar, nothing amazing but the scores were good enough to get through. I shot some really good ends and some average ones, but overall I got the win and that's the most important thing. I want to hopefully practice a bit more and be ready for the National Tour Finals. I've not been shooting as much as I normally would this year, and I had an injury at the start which hasn't helped. So fingers crossed that I'll be ready for the finals and I'll be good to go," James Mason told us.

The compound men who have finished within the top 8, earning their place in the National Tour Finals are:

In the bronze final were Izzy Carpenter and Lizzie Foster. Izzy took a two point lead after the first end with 29 points to 27. Both women then shot a perfect 30 each in the second end. Once again the women tied, this time on 29 points in the third end. Lizzie then shot a 28 to Izzy’s 27 to bring the difference between the two women to only one point with the last end to go. A 30 to finish from Lizzie was enough to overtake Izzy by two points, winning the match 144-142.

In the gold final, Ella Gibson met Layla Annison for the win. Ella opened the match with a 29 to Layla’s 28, and then Layla came back with a 30 to Ella’s 29 in end two. Both women then tied on 30 apiece in the third end and also in the fourth end. The scores stood at 118 all going into the final three arrows of the match. A 29 from Ella to Layla’s 27 was enough to take the lead and the gold medal with 147-145.

"I haven't shot that much in the past couple of weeks post-Colombia as I've been taking a little bit of a mid-season break. I have quite a lot going on in eight weeks, in October I'm going to the World Field Championships and the World Cup Final, so I've been taking a bit of time off and some low volume shooting. So today was definitely a little bit harder than normal for me. Qualifier was pretty rocky, I seemed to have all or nothing most ends. I shot much nicer to finish up and shot some really solid matches. It was incredible to see the level of all the women here today. I'm really proud to take the win, but also really proud of all the girls out here and how they've been shooting. I know the National Tour Finals is going to be tough. I'm not going in expecting to win or expecting it to be an easy ride because I know it's not. There are seven other girls out there who are more than capable of winning on the day. So I'm just going to stick to my game, stick to my shots, and see whether I win or lose," Ella Gibson told us.

The compound women who have finished within the top 8, earning their place in the National Tour Finals are:

The leading archer for the barebow men after the qualification round was Wilco Van Kleef-Bolton with 624 points.
The last four archers standing going into the medal matches were 1st ranked Wilco Van Kleef-Bolton, 2nd ranked James Annall, 5th ranked Mark Turner, and Ralph Barwise who finished in  3rd.

In the bronze final, Mark Turner met Ralph Barwise for the third spot on the podium. A 27 from Ralph in the first end to Mark’s 25 earned him the first lot of set points. The men then shot 26 points apiece to take the score to 3-1 in Ralph’s favour. Mark then responded with a strong 29 end to take the points to 3-3. With only a point more than Mark in the next end, Ralph took the points to 5-3 with 25-25. In the last end, Ralph shot a 26 to Mark’s 24 to take the bronze 7-3.

Going for the gold medal and the top place on the podium were Wilco Van Kleef-Bolton and James Annall. James opened the match with a 28 to Wilco’s 26 to take the set points for the first end. Wilco then shot a 25 to James’s 23 to equal out the set points to 2 all. A strong 29 from Wilco earned him the set points for the third end, bringing the score to 4-2. James shot two consecutive 27 ends to Wilco’s two consecutive 23 ends to finish the match 6-4, earning himself the gold medal.

"The day went very well. It was up near where I have been shooting for the qualifying round, and the head-to-heads went well. The National Tour stages have been a good experience, especially getting head-to-head practice. That was the main reason for doing them this year," James Annall said.

The barebow men who have finished in the top 2, earning their place in the National Tour Finals are:

For the barebow women, at the top of the qualifying table was Sarah Hubbard with 570 points.

The bronze final saw Ilia Sediq face Helen Brown for the final spot on the podium. Helen narrowly lost out on the set points for the first end, shooting 18 to Ilia’s 21. Ilia then shot 23 to Helen's 17 to take the second end 4-0. In the final end, Ilia shot an 18 to Helen's 15 which was enough to win the match with straight sets 6-0.

Going for the gold medal, Sarah Hubbard met Kim Doherty. They both shot 20 in the first end, tying the set points on 1 all, and then Sarah won the second set with 23 points to Kim's 20. In the third end, Kim shot another 20, but it wasn't enough to take the set points from Sarah who shot a 24. Sarah finished the match on a 26 to Kim's 24 to take the gold medal with 7-1.

"My day went really well. It was a bit of a dodgy start, but I pulled it back in the second half for the rankings. The head-to-heads were quite tough, it was really getting quite warm down our side of the field. But everyone shot well, we pulled through. This is the only National Tour stage I've done, so next year I'm hoping to do more and to try and get through to the final. It wasn't really kind of a focus this year to do the National Tours, but I just wanted to at least so one. But hopefully next year I'll participate more and get through to the final," Sarah told us.

The barebow women who have finished in the top 2, earning their place in the National Tour Finals are:

The full results and the final National Tour standings can be found here.