Nominate your coach for the UK Coaching Awards

Hosted by UK Coaching, the UK Coaching Awards will be held at The Tower Hotel London on the 5 December 2019. The awards are set to showcase the diverse work of coaches from all walks of life helping people improve their well-being and activity levels. 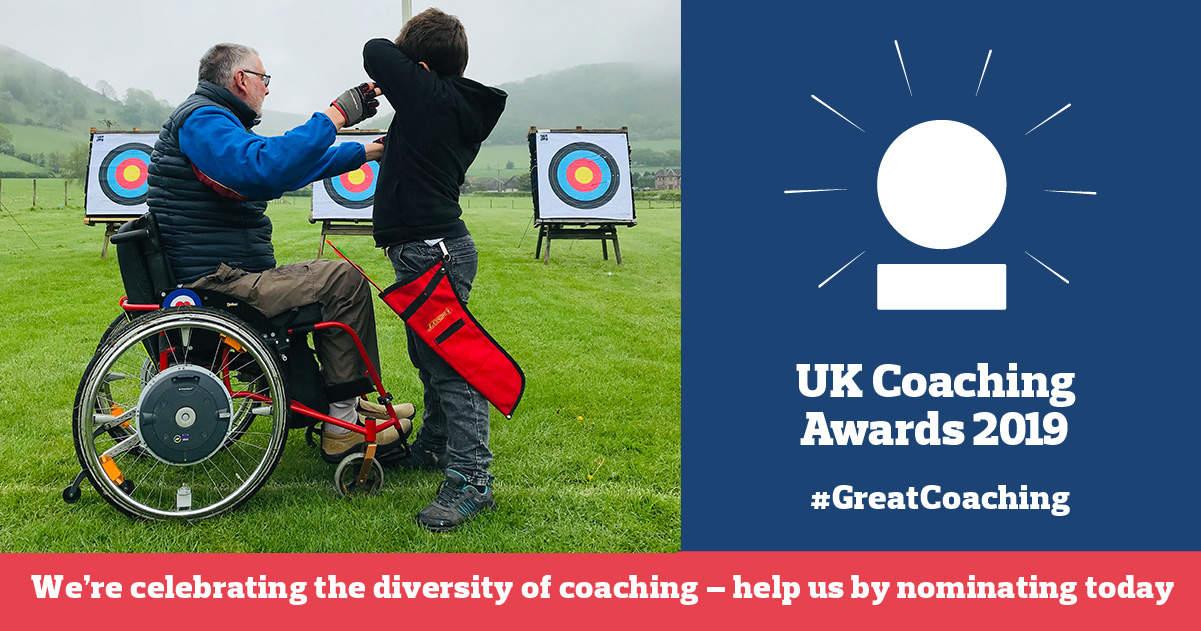 UK Coaching's research shows that the UK coaching community is diverse at grassroots levels, and through working alongside UK Sport and Sport England more is being done to attract a wider range of people into coaching at all levels.

With over three million people coaching regularly across the UK, this year's Awards have been designed to ensure all coaches who give so much, from grassroots to the global stage, are recognised.

Archery GB has over 2,000 licensed coaches and nearly 10,000 archery instructors who dedicate their time to helping others reach their goals. Hannah Bussey, Coaching and Systems Manager at Archery GB commented: Â"We would like to encourage our members to nominate a coach who has made a real difference, we understand the impact great coaching can have on people's lives. Recognition for coaches is really important, so if you know someone who deserves to win then please take the time to nominate them.Â”

For the Awards, UK Coaching uses the broad definition of coaching and welcomes nominations on behalf of coaches, instructors, leaders, teachers, trainers and others who support people to achieve their sport and activity goals.

Â"We are very excited to be opening this year's awards nominations. Through our summer of great coaching, we have demonstrated to more people than ever the transformative and long-lasting effects of coaching, contributing to the nation's health, social integration and happiness.

Â"Broadly speaking, the coaching family across the UK is made up of a range of people from different backgrounds, experiences and motivations with a common belief to help people be the best they can be, whether that's to win a gold medal or move more than they did yesterday. We would like the public to celebrate the work of coaches by nominating a diverse array of coaches that have made a difference in people's lives and their communities.Â”

Overall, there are 12 award categories, eight for coaches, three in support of coaches and the Great Coaching Moment of the Year. All honour #GreatCoaching and truly celebrate coaches and organisations that make a difference.

New for 2019 is the Changing Lives Award, which will be awarded to a coach who is leading the way to empower, inspire and connect people from diverse communities to overcome life challenges using the power of #GreatCoaching.

Make your coach feel special, nominate them for the UK Coaching Awards.

The Awards for Coaches are given to individual coaches who have excelled and shown outstanding commitment in a certain area, or to an individual and/or group over the last 12 months. Collectively, they are:

The Awards in Support of Coaches recognise those who recruit, develop, educate, qualify, and/or deploy coaches effectively in the UK. Collectively, they are:

The Great Coaching Moment of the Year, which celebrates a moment in time when a coach's support and guidance paid off, will be back again this year. The Sports Journalists' Association will be providing this year's shortlist which will then be made open to a public vote. Further details will be announced soon.

Public nominations for the awards will close at noon on the 18 September and what follows is a rigorous, independent and impartial judging process. To ensure welfare is at the heart of the UK Coaching Awards, UK Coaching has a strict set of guidelines and criteria, through which an independent judging panel select the finalists. All finalists are verified by their respective governing body sport or representative organisation and all finalists are asked to sign and adhere to the UK Coaching Code of Conduct. All nomination information is treated as confidential until shortlists and winners are announced.

Nominate a coach for an award at ukcoaching.org/coachingawards.