Archers representing the Royal Navy, Army, and RAF took the opportunity to shoot together in a friendly competition at the National Indoor Championships on Sunday 5 December. 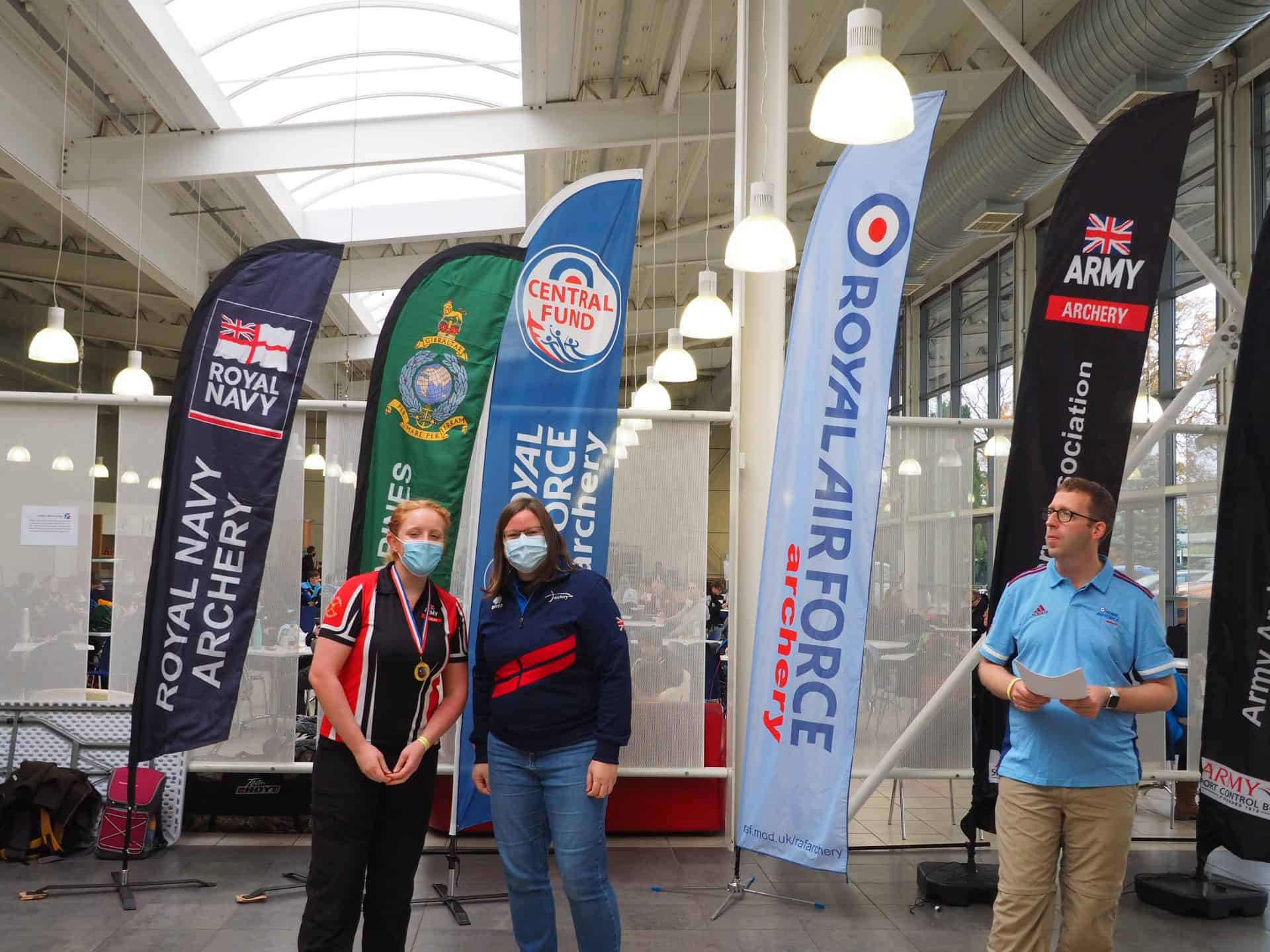 Since 2019, and despite the challenges of the pandemic and a Service life that can mean little time to improve archery skills, many new faces from each of the Services have taken up the sport, some for the first time and others picking up where they left off. On this occasion it was the Army that claimed victory in this friendly tournament, which saw plenty of banter between the three organisations.

The RAF's Ellie Spinks, Sergeant in Avionics, said: Â"My husband introduced me to archery - I went along back in August to see if I'd like it and I was hooked from the first arrow. This is my first time at the National Indoors. I did an RAF archery beginners' course and they took us through a mini tournament so we'd have some idea of what to expect, so today isn't a complete shock, just a lot more people than I'm used to! It's really interesting to be here, and everyone's been really friendly. I wasn't really taking much notice of my score though; I was just enjoying shooting my barebow - I love the clean, bare essentials of the bowstyle.Â”

Recurve archer, Siobhan Mundy, also from the RAF, said: Â"I find archery is a good distraction from work. You go to the range and forget about everything that's going on, especially during the pandemic - it's been a godsend to have that time to focus just on the sport. I'm based in Norfolk, and I'm lucky to have a dedicated range at my unit that I can access; other stations have to share a gym space. I started the sport in the Army Cadet Force and really enjoyed it so went on to do an Instructor's course. When I joined the RAF I continued with archery and have just done my Level 1 coaching course. This is the first time I've attended this event; I'm happy with how I've done - it's given me a benchmark for what I need to improve on. It's made me realise I need to shoot a lot more!

RAF Sergeant Keith McEvoy said: Â"I've been in the RAF for 25 years and haven't done any sport, but when I saw archery was available I liked the sound of it as it seemed more of a skill than a sport. I did a beginners' course in August after I was persuaded by our Brize Norton Archery Club Secretary, Lindsay Kelly. She later suggested I enter this competition but I didn't realise how big it would be! After Christmas I'm going to get my own recurve bow - I've tried compound and enjoyed it, but it seemed to me more like shooting a gun than a bow and arrow. I'm very new to the sport so I'll give everything a try! In the military, we're all encouraged to partake in sport at station-, club-, county-, or national level. They'll back you and in some cases help with funding. Through our membership of Archery GB and the RAF Central Fund, we managed to pay our admin entrance fees for this event.Â”

Royal Navy Warfare Specialist, Chris Cassells, said: Â"I've only been in the Navy a year. I tried archery for the first time at a holiday camp with my family in France about ten years ago. When we got home I did a beginners' course with Greenwood Osterley Archery Club and carried on from there. The Navy is supportive - once I'd finished the basic training I had a lot more time to do archery and they've been helpful in setting things up for me. I shoot at a civilian club near the base, and the Navy allow me time to train and compete, as they did for this event.Â”

Gavin Edward, Chair of Royal Navy Archery, added: Â"I spend a lot of time coordinating activities between the Army and RAF to make sure we get four shoots in a year against each other. The support from AGB is great because it allows each Service to be a County in its own right - it allows us to track our archers across the country. This is the largest Navy contingent we've had at an indoor competition, and the largest gathering of Service archers we've had for as long as I know. More people are coming into the sport when they join up because it's more visible than ever before. All the Services have a strong policy of making time in the working day for sport and physical activity because it's so important to our wellbeing.Â”

The Army's Sarah Roderick, said: Â"I've only been in the Army a year and a half and got to my first posting and joined archery straight away. I started archery before I joined up but always want to get to a higher level with it. The Army allow me plenty of time to train - it's great! I usually do outdoor competitions and this in my first National Indoor event. It's gone fairly well!Â”

Helen Smedley, Archery GB's Regional Development Officer (Midlands), said: Â"It was fantastic to see so many serving armed services personnel competing at the National Indoors from the RAF, Army and Royal Navy. The Chairs of all three archery associations have been such a pleasure to connect with over the special relationship between the three services and Archery GB, as we try to proactively increase the participation in archery in the services. I look forward to supporting them as they continue to push the sport forwards in future, and to see how many can compete, and who wins the Indoor tri-services competition next December!Â”

Joining the Services? You can find out more about archery through these contacts: