A shot at the Gold for the Recurve Women in Antalya

The recurve women start the day off in style, earning a spot in the team gold medal match at the Antalya Hyundai World Cup 2022. Ella Gibson will shoot on Saturday's final field for the compound women. 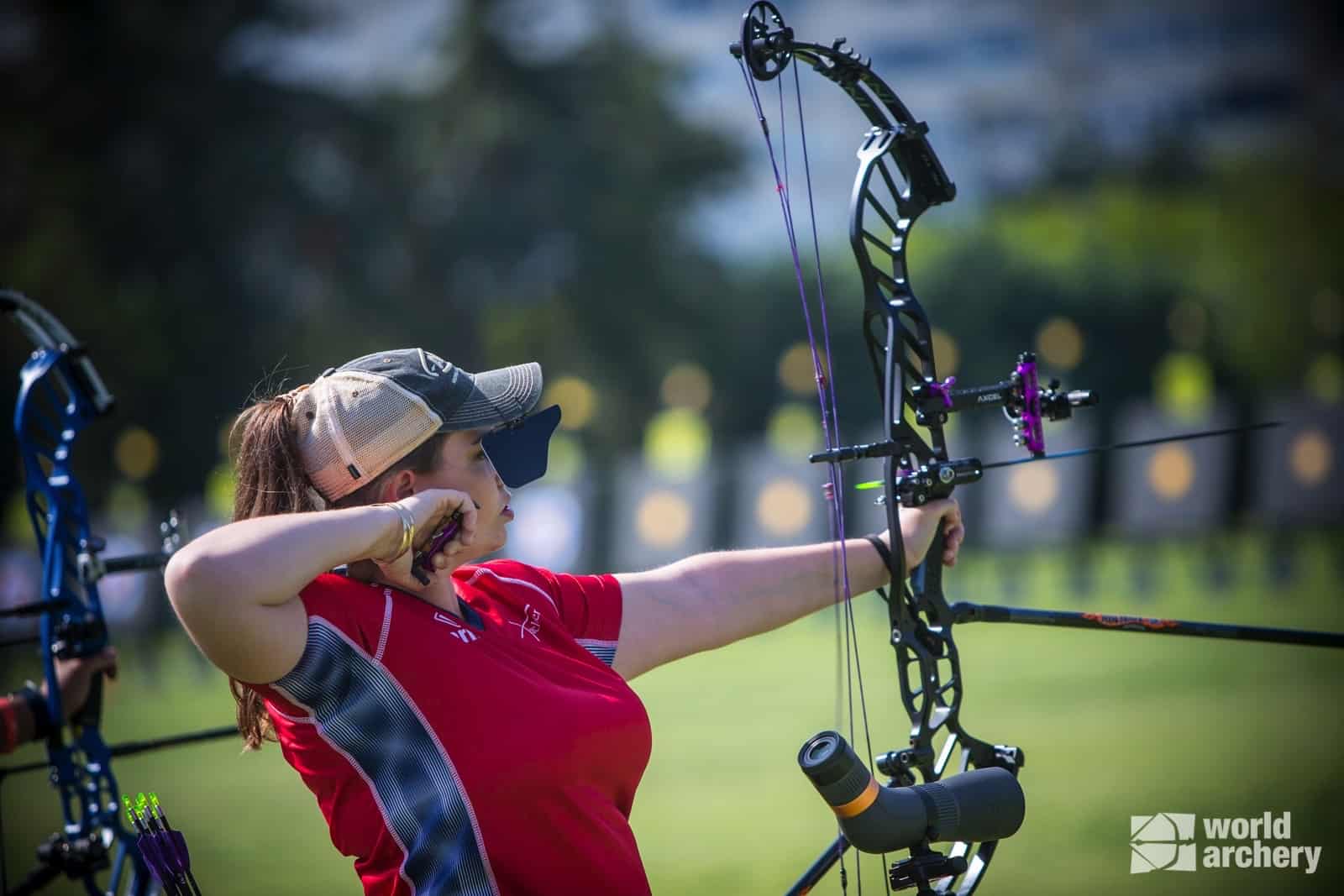 The recurves shot their team rounds in the morning today here in Antalya. The men started off against the team from Portugal where they took the match 6-2. Next in the 1/8, they faced Germany. GB took the first two set points, but Germany put in a 55 and two 54 ends to take the match 5-3. The GB men have therefore finished in joint 9th place overall as a team.

Following their bye round, the GB women faced Ukraine in the 1/8 eliminations. They only let set go in their opponents favour, taking the win 6-2. Up next was the Australian team, who the GB women dominated with straight set wins, 6-0. Lastly today was the semi-finals, and GB came up against Chinese Taipei who ranked 2nd overall after qualification. GB took the first set, and then Chinese Taipei took the next two set, putting GB 4-2 down. In the last end, GB brought it back with a 56 to their opponents' 53 to take the match to a shoot off. X, 10, 9 was enough to take the win, sending the GB women to Sunday's live final gold medal match.

"I'm really happy with how we shot. There were some really awesome ends in every match, and to win the semi final on a great shoot off too just finished off the morning in the best way! It's the first time we've shot as a team, and obviously it is Jess and Penny's first World Cup, so to have earned our place in the final fills me with confidence for the future. I'm super excited for Sunday and being back on the stage," said Bryony Pitman.

In the afternoon, the compound men and women had their individual head-to-head matches. After the 1/32 round, all of the men were still in. James Mason shot a 144 against Batuhan Akcaoglu, Adam Carpenter shot a 143 to Stef Willems's 141, Kai Thomas-Prause shot 142-141 against Reginald Kools, and Adam Ravenscroft won Sil Pater 142-141.

Next in the 1/16 round, Mason sadly lost to the world number one, Mike Schloesser from the Netherlands, 148-142. Unfortunately, Thomas-Prause and Carpenter's match was against one another. Going into their final end, the men were tying on 114 each. Thomas-Prause shot a 30 to Carpenter's 29 to take the win. Ravenscroft also lost his match against Stas Modic from Slovenia, 141-139.

"I felt very nervous, and this showed in my first two matches. The first because of the pressure of the world stage, and the second because it was against a teammate and friend. I was settled by the time it got to my last match, but unfortunately one shot made the difference for me in the end. I am however, thrilled with how my first World Cup went, and I cannot wait for the next one!" Kai Thomas-Prause said.

In the 1/32 round for the compound women, teammates Layla Annison and Susan Corless shot against one another. It was Corless who took the match in the end with 142 to Annison's 136. My match was against USA Brielle Ochnich where I earned the win 142-136.

Next in the 1/16, Corless sadly lost her match against Chinese Taipei's I-Jou Huang 145-142. Ella Gibson joined the shooting following her bye round. She shot against Andrea Muñoz from Spain, taking the win 149-143. I faced 11th ranked Maris Tetsmann from Estonia where I shot 144-142 to take the win.

In the 1/8 round, Gibson shot 145 to Sanne de Laat's 142 to take her to the final 8. As for myself, I faced Colombia's Alejandra Usquiano who is 9th ranked in the world. She shot 147, one of the highest scores across the women's side, to earn her the win over my 142.

Finally was the quarter finals, and Gibson faced Ayse Bera Suzer from Turkey. The women were tying on 115 a piece going into the final end. Gibson's X, 10, 10 clipped the Turkish woman's X, X, 9, earning her a place in Saturday's live semi-finals.

"My matches were super tough today and tight throughout, so it was a real battle, but I'm so happy to get through. It feels like I've been working so hard for so long to get here, and I can't wait to see what will happen of Saturday. I'm just going to take it one arrow at a time, and see where I end up." Ella Gibson said.