Britain's archers will be returning from the European Youth Cup in Marathon with a gold medal, a silver and a very creditable fourth place for compound cadet Kai Thomas-Prause. 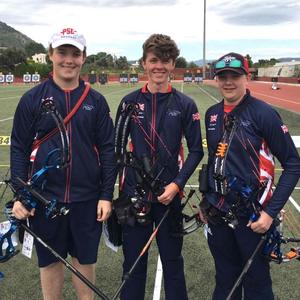 Kai battled his way past Estonian Robin Jaatma and teammate Jake Walsh in the quarter final to land a place in the individual bronze medal match against Namibia's Dirk De Bod. And one arrow made all the difference.

The archers were facing strengthening winds and timing equipment issues as they stepped up to the line. De Bod started with a 10, followed by an eight from Kai. There was another 10 from the Namibian but Kai timed out on the second arrow, leaving him facing an uphill battle. But he fought back. De Bod edged the second and fourth ends while Kai tied the third and finished in style, taking the last end 29-23. It was not enough however and the Namibian claimed a 133-124 win and the medal.

Kai is not coming home empty-handed though. He will be bringing back the compound cadet team gold he won with Liam Peake and Adam Carpenter yesterday. They put on a spectacular performance against Greece, shooting three Xs and three 10s in their first end and increasing their lead with a 57-51 score line in the second and 57-54 in the third.

The home team fought back in the fourth end, finishing on three nines, two 10s and an X to take it 57-50 - but the damage had been done and Britain claimed a 224-213 victory.

And on Wednesday, Hollie Smith and Jake Walsh won Britain's first medal of the competition, mixed team silver.
Jake and Hollie had seen off home favourites Greece in the semi-final, losing the first end then powering back to take the last three and a 140-136 victory.

Then they faced Italy. Britain took the first end 36-33 but then Italy took the last three and the gold medal.

As well as Jake, there were quarter final finishes for two other British archers. Recurve junior Bryony Pitman topped the rankings but finally fell foul of the eventual silver medallist, France's Oceane Guy, while compound junior Sarah Moon was knocked out by bronze medallist Begum Topkarci.