The gold and bronze medal matches have been shot at the European Para Cup Finals, naming 2022's individual and mixed team champions. 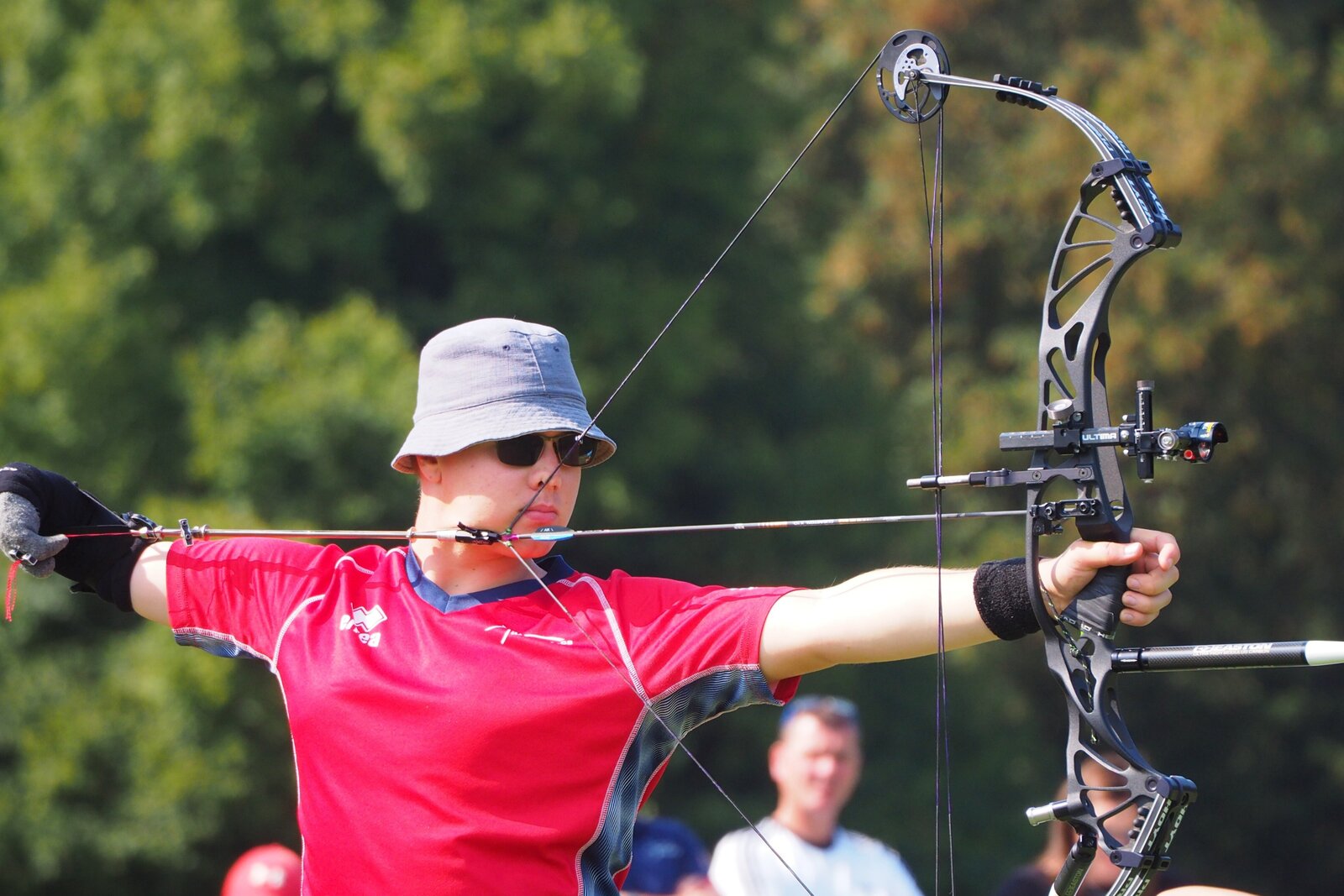 W1 Open man Martin Saych faced Hungary’s Tamás Gáspár in the gold final. Both archers opened the match with 26 points, followed by another 26 from Gáspár and a 27 from Martin. Gáspár came back in the third end with a 29 to Martin’s 28 to bring the match to all square on 81-81. In the fourth end, Martin gained a four point lead by shooting a 28 end to the Hungarian’s 24. A 26 in the final end was enough for Martin to beat Gáspár’s 25, finishing the match on 135-130 to take the gold medal.

“It’s an amazing day, and just the feeling of shooting in the UK is great. I’m just so happy,” Martin said.

In the W1 Open mixed team division, Martin returned to the stage alongside teammate Victoria Kingstone to compete for the gold against Italy. The Italians opened strong with a 36 end to GB’s 29. GB came back with a 33, and the Italian’s shot a 35 to bring the points to 71-62 in Italy’s favour. The third end was a close one, GB shooting a 35 just short of their opponents’ 36. In the last end, GB’s 28 wasn’t enough to make up the ground against the Italians, who won the match 144-125. Martin and Victoria will bring home the silver medal.

“It’s been a great experience to be shooting here at finals, and to come away with a bronze individually and a silver for the team event is just the combination of a fantastic year,” Victoria said. 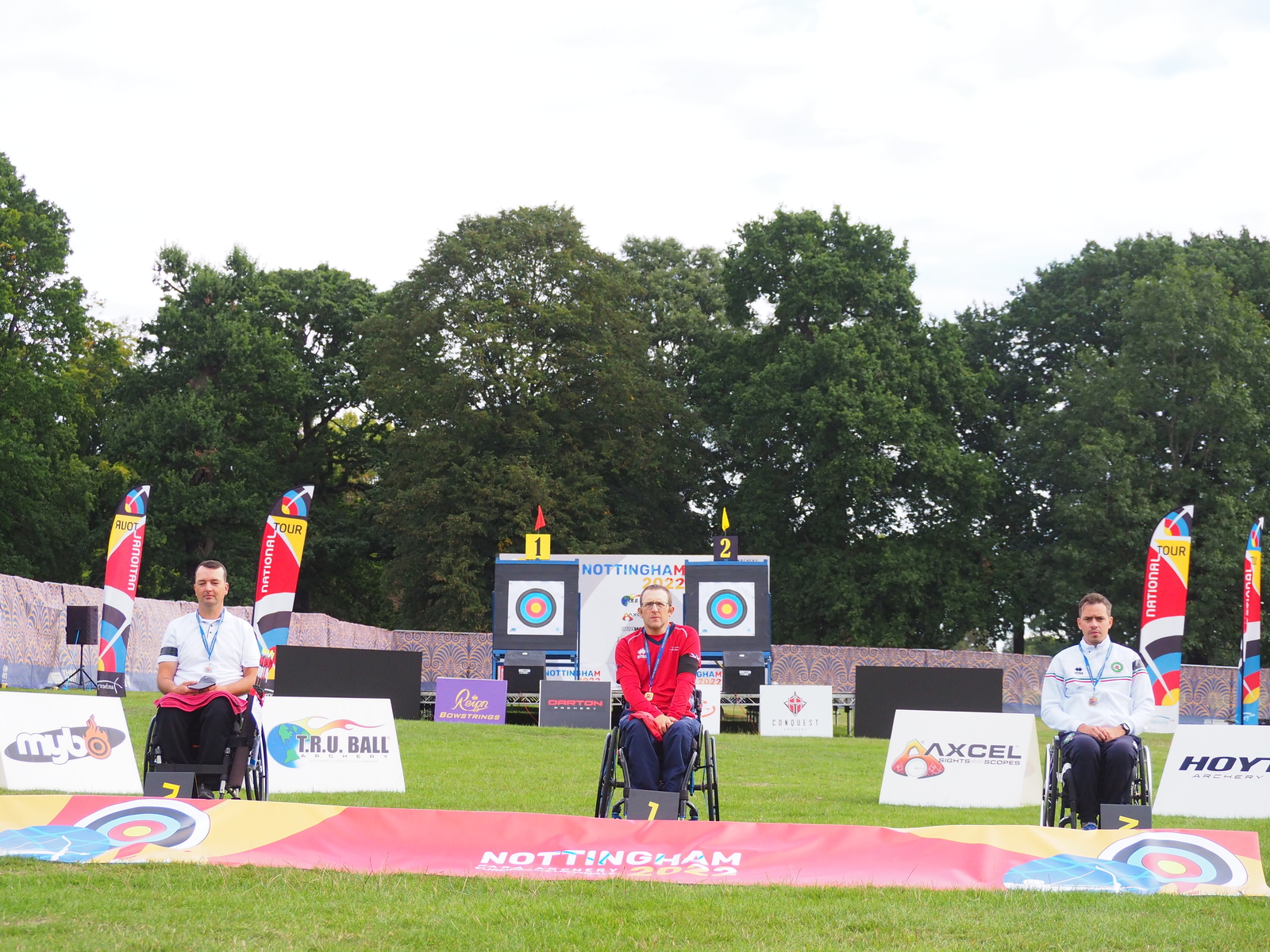 For the compound women open, teammates Phoebe Paterson Pine and Jessica Stretton faced one another in the bid for bronze. Phoebe took a one point lead after the first end with a 28 to Jessica’s 27. The two women then tied the second end on 27 apiece, keeping the scores only one point apart. By end number three, both athletes found a strong rhythm, shooting another tie this time with two 29s. The fourth end was once again drawn making this the second consecutive 29 end for both Phoebe and Jessica. It all came down to the last end with Phoebe only narrowly leading by one point. The women continued with their high standard of shooting, scoring their fourth tied end of the match with 28s. Phoebe took the match win and the bronze medal with 141-140 over Jessica.

In the compound men’s open category, Jamie Harris faced Belgium’s Piotr Van Montagu for the gold medal. Jamie brought his A game, opening the match with a perfect 30 to the Belgian’s 27. The second end was tied, both archers shooting a 29, keeping the score difference to three points. Jamie shot a 28 in the next end to Van Montagu’s 27, extending his lead to four points. Van Montagu responded with a 29 to Jamie’s 27 in the fourth end, taking away two points from Jamie’s advantage. In the final end the men tied on 27 apiece, completing the match on 141-139 in Jamie’s favour. He will come home with the individual gold medal.

In the mixed team gold final, Jamie Harris and Phoebe Paterson Pine shot against the team from Italy. The first end was a tied on 36 points apiece, and then GB took a one point lead with a 36 in end two to Italy’s 35. The third end was another tied with both teams shooting a strong 39 each. In the final end, Italy shot a second consecutive 39 end, however GB shot a 38, bring the match to a tie on 149-149. It was GB who were able to hold their nerve in the shoot-off, scoring a perfect 30 to Italy’s 18 to win the gold medal.

“Today was amazing. Jamie and I shot so well together in the gold medal match. Getting to the last end and it being so close, and leading into the shoot-off that we had, we worked really well together. We communicated well, and we both managed the pressure really well too. I’m proud at the both of us for how well we’ve done,” Phoebe told us.

In the mixed team division, David and teammate Hazel Taylor faced Latvia in the bronze final. After end one, GB narrowly took the first lot of set points with a 31 end to Latvia's 30. Both teams then tied the second end with 34 points apiece, bringing the score to 3-1 in GB's favour. In the final end, GB shot a strong 35 to Latvia's 32 to take the match win and the bronze medal, 5-1.