The second official day of competition took place in Romania for the first leg of the European Youth Cup, where the mixed teams shot all the way through to the finals. 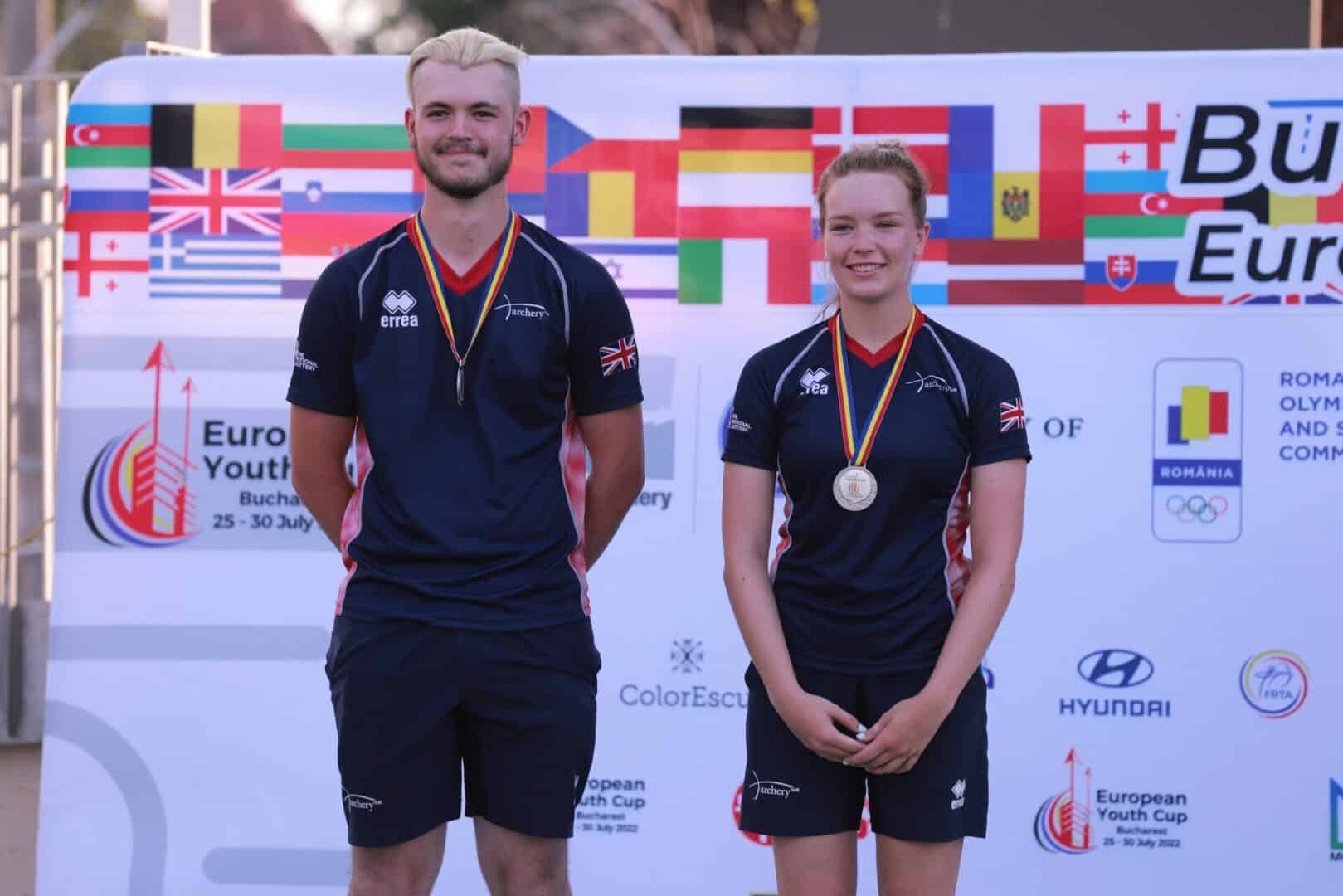 For the compound under 21 mixed team, Jenny Bryan and Dillon Crow shot their quarter finals against the team from Portugal. After the first end they were leading by two points, 37-35, and continued this lead as they progressed. Going into the final end, they were seven points ahead, and a 39 end to finish won them them match 153-142.
Next, in the semi-finals, GB faced the German team. Once again, GB got the lead early on, shooting consistent 39s for three ends. In the final end, they shot a 38 to Germany's 37 which was enough to take the match 155-149. In the gold final, GB faced the 3rd ranked team from the Netherlands. After end one, GB were leading 38 to 37, and then in end two the Dutch pulled back a one point advantage by shooting a 39 to GB's 37. GB stayed consistent, shooting two 38s in the last two ends, however the Dutch were just that bit more consistent shooting two 39s. Unfortunately, the opponents took the win 154-151. Jenny and Dylan will be returning home with the compound under 21 mixed team silver medal.

In the compound under 18 mixed team quarter finals, Sinead Byrne and Ioan Rees shot against the team from Switzerland. Both teams were tied after the first end on 37 each, and then GB shot a 39 to their opponents' 36 to take a three point lead. GB continued to add more points onto their advantage for the last two ends, finishing the match on 152 to Switzerland's 144.
Next up was the semi-finals against Slovakia. Both teams were drew the first end on 35 points each, and then GB shot a 39 to their opponents' 38 to take a one point lead. In end three, both teams shot a 38, the advantage still sitting with the Brits. For the final end, GB dipped to a 36 end, however the Slovakians stayed consistent with another 38. It was enough for them to win the match by only a single point, 148-149, sending GB into the bronze final.
With a medal at stake, GB faced the 4th ranked team from Germany. The match got to a rocky start, GB shooting a 34 to Germany's 37, putting them in a three point deficit. GB then quickly found their feet and shot a 39 to their opponents' 37 to claw back their loss to only a one point difference. Yet another 37 from the German's to GB's 38 brought the scores all square on 111 with only one end left. GB threw down a perfect 40 end to Germany's 37, winning the match with 151-148 to take the third spot on the podium.

Yesterday in the qualification round, the under 21 compound women's team, Patience Wood, Hallie Boulton and Isabella Bruiguier, shot a combined score of 2036. This has unofficially beaten the European record which was 2033, held since 2019 by Great Britain's Lucy Mason, Layla Annison and Hollie Smith.

For the recurve under 21 mixed team, Louisa Piper and Monty Orton met the 13th ranked team from Slovakia in the 1/8 round. GB took the first lot of set points with 37-35. In the second end, a miss from GB meant the Slovakians were able to take the second lot of set points, bringing the match to 2-2. The third end was tied on 37 apiece, meaning the winner of the next end would take the match. Sadly, a 32 from GB versus Slovakia's 35 meant they lost their 1/8 round.

In the 1/8 round, the recurve under 18 mixed team comprising of Maxwell Oakley and Megan Havers shot against the team from Latvia. The opponents got to a flying start against the Brits, taking the first to ends of set points, putting GB at a 4-0 deficit. GB then came back with a 38 and a 36 to take the next two ends, forcing the match to a shoot-off. Maxwell and Megan shot an X and an 8 versus the opponents' 9, 9 which gave them the win. In the quarter finals, GB faced the 14th ranked team from Slovakia. The opponents took the first end win, but then GB came back to take the next three end wins in a row with 35, 36, 35. 6-2 over Slovakia earned them their spot in the semi-finals.
Next up GB faced Poland who ranked in 7th after the qualification round. The Polish were on form today, shooting 37, 37, 39 to GB's 33, 34, 37 which was enough to take the match win with straight sets 6-0.
This sent GB into the bronze final to shoot against Israel. GB took the first end with 35-32, and then the team from Israel took the second end with 37-33. GB took end three and then their opponents took the fourth end, taking the match to a shoot-off. Unfortunately, a 10 and an 8 was not enough to beat the opponents' two 10s, meaning GB finished in 4th place.

Results can be found here