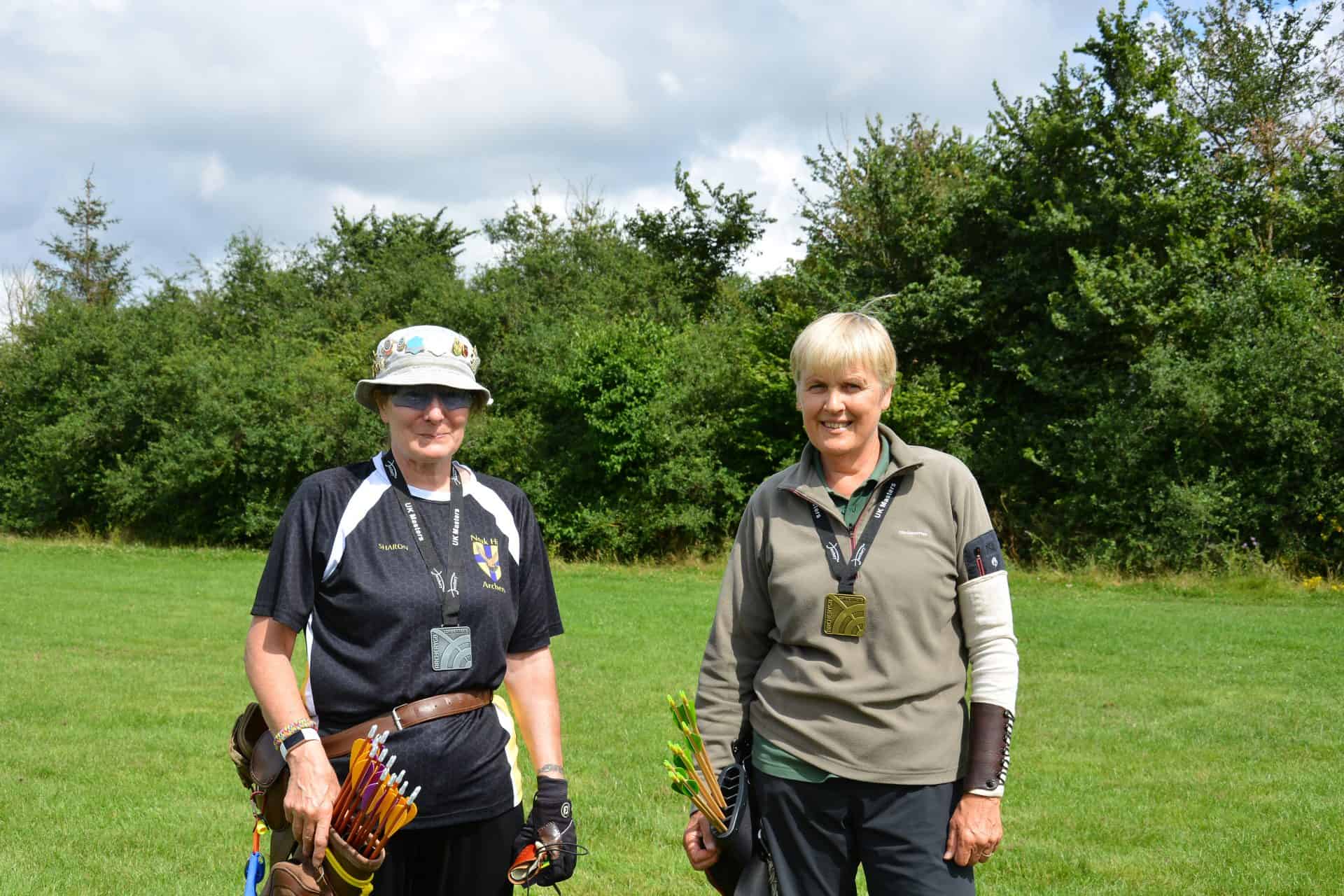 The event was open to all archers born in 1971 or earlier, and attracted over 70 entries from around the country, ranging from 49 years old to almost 90. It was the first time the event has been held, following the inaugural World Championship for Masters Age athletes held in 2018.

Almost half the entries were in the gents recurve category, with 34 archers competing on the day over a WA 60m round and head to head matches. John Prior of Supermarine came into the event as the record for the double round, and he added the record for the single round to his resumé with a 644 in the morning. A further seven men passed 600 points to round out a high class field, with lots of new silver target awards claimed.

Prior was made to work hard through the afternoon, three times going to 2-2 after 2 ends and having to find 28s and 29s to win sets. In the end, no one could quite match him and he took the gold from second seed Kevin Barrett (Howard Bowmen) 6-2 in the final. The bronze match was contested between the 12th seed John Dibley of Mayflower and 14th seed Andy Smart of Silver Spoon, having defeated the 3rd, 4th, 5th and 6th seeds between them. Three tightly contested sets saw Dibley take the bronze.

The ladies recurve also followed the form book, with national record holder Wendie King of Mayflower seeding first with 606 points. Second seed Debbie Geddes of Lethen was close behind with 595, and the top two seeds proceeded to the final, King prevailing 6-0. Third seed Sue Wolfendale of Gronant shot a Welsh record of 557 in the ranking round, and overcame Shirley Beddoes of Reigate 6-4 in a hard fought bronze medal match.

In the gents compound, Shai Qureshi of Burton Joyce narrowly gained the top seeding with 674 ahead of Carlos Bolou of Crown Archers with 670. Qureshi showed his class through the matchplay, shooting 142 in the semi and 143 in the final to take gold. Third seed Bill Chapman of Bowmen of Glen defeated Carlos Bolou in the semi-final to take silver, and set up a battle between Carlos and older brother Jose Bolou for the bronze. Carlos turned up the gas with 143 to take the bronze medal.

Just a few days ahead of her 69th birthday, Pauline Burfitt from Chippenham had intended to retire earlier this year but came back to dominate the ladies compound. Burfitt gained the top seed with 644 and a bye to the final, where she overcame Amanda Davidson of Lincoln, 134-128. Linda Haines of Evesham finished third.

On the other side of the range, 16 barebow archers took on the new 50m round. The current national record for all archers stands at 607, and it was almost improved on in the morning. Talan Skeels-Piggins of Surrey Bowmen, a former paralympic skier shooting in only his second competition, was just two points away with 605 to take the top seed. Record holder Richard Heathcote of Talisman shot a 599 to finish second. Heathcote was beaten in a shoot off in the semi-final by Mick Lovell of Northampton, but Skeels-Piggins ran away 6-0 in the final to take gold. Heathcote took bronze by the same scoreline. Victoria Williams was the only lady shooting on the day so took gold with a 522.

There may have only been two ladies longbow archers taking part, but Sheila Hudson of White Rose shot a brilliant 513 to take the highest longbow score of the day. Sharon Lawrence of Noak Hill wasn't far behind, shooting the third highest score with 427. Hudson took the win in the match. Kevin Macey of Deer Park top seeded in the gents event with 461.

It was a successful weekend for the Hudsons, with husband Richard seeding third and winning through to the final where he was eventually defeated by Macey. Second seed Peter King of Supermarine took the bronze ahead of Paul Tuffs of Bath.

The event was a fantastic celebration of archery as a sport for all ages and abilities, with some familiar names from the national circuit competing alongside many archers doing their first competition. One archer was competing for the first time since 1984! With three medals being won by archers shooting from a wheelchair or stool, it was a great day for para archers as well. The organisers are already looking forward to next year's event and would love to welcome more archers from across the country.

The event completed a busy weekend for Wallingford Castle Archers, with an open 720 event on the Saturday. The titles went to Yang Pei (GR, Oxford Uni), Imogen Sullivan-Bell (LR, Archways), Jacek Pedziwiatr (GC, AGB), Susan Corless (LC, Northampton) and Oliver Hicks (Barebow, Warfield). The organisers would like to thank all the judges and club volunteers who made the weekend possible.

With thanks to Marc Tamlyn for the article and photos.