The second stage of the 2022 Archery GB National Tour took place at Brechin, naming the champions of this leg of the tournament. 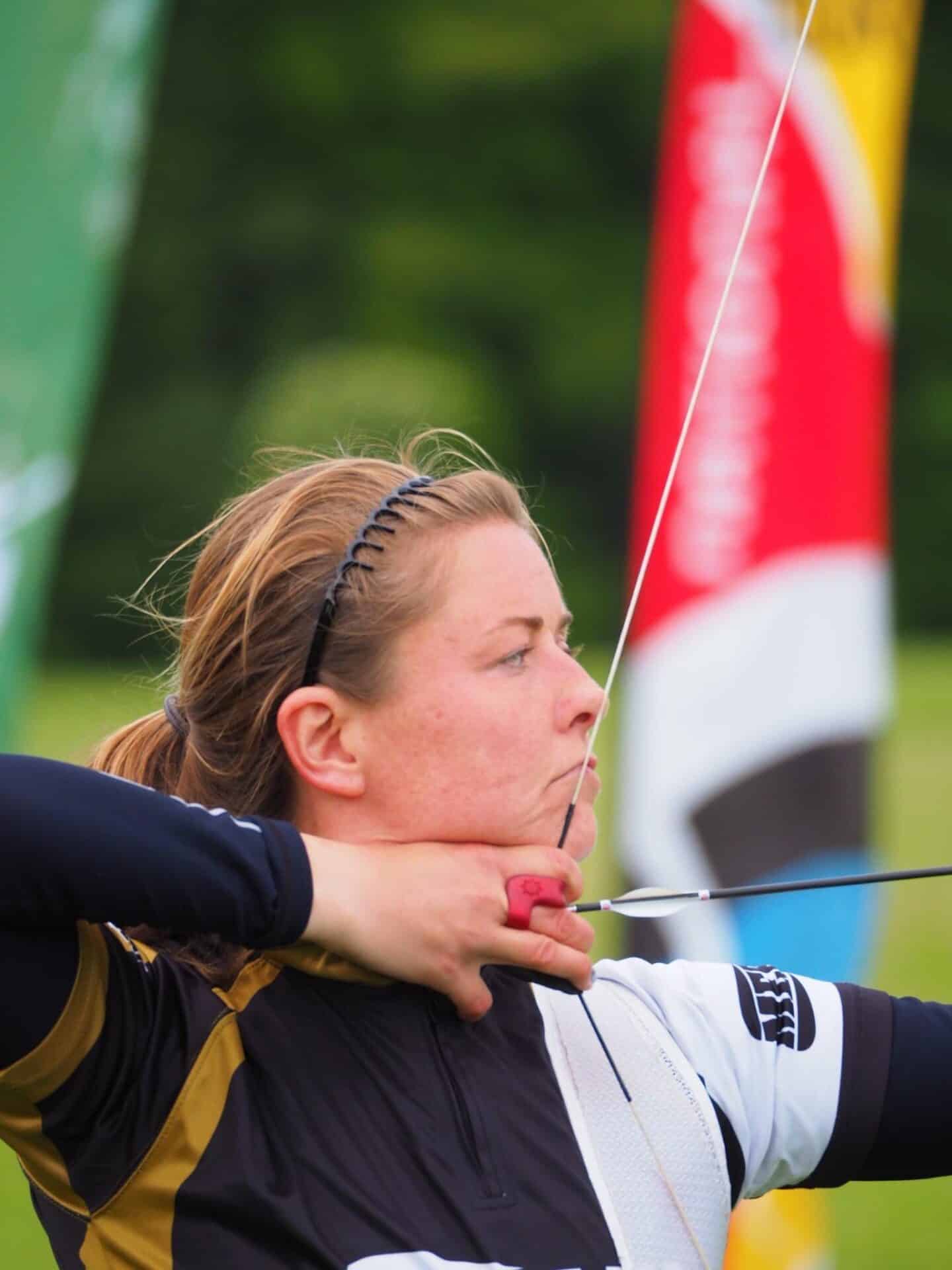 The sun came out to start at the National Tour Stage 2 at Brechin Castle Equestrian Centre where the archers completed their WA720 qualification round to find who would take the top seed places in each of the categories. They managed a few ends of the ranking round before the wind took hold for the rest of the day, going into the head-to-head eliminations.

Barebow at the National Tour Stage 2

For the barebow women, Nikki Ledwick took the top spot after qualification with 442 points. As for the head-to-heads, Ledwick and Kirsten Shoesmith were the only two barebow women. In their gold final match, Ledwick opened strong with a 26 end to take the first two set points. Shoesmith came back with a 21 to take end two. The third end was close, 17-16 in Ledwick's favour, and then the fourth end was tied on 19 points each. It came down to the last end where Ledwick shot an 18 to Shoesmith's 8 to take the win, 7-3.

"Not many of us up here which is a little disappointing. There are better girls out there than me wanting to come out to play. I'm happy," Ledwick told us.

In the barebow men's division, Brett Stringer ranked in first place with 536 points. Stringer was joined in the last four going into the finals by Edwin Jones, Colin Allan and Kevin Mcguane. Stringer lost to Jones in the semi-final on a shoot-off, sending Jones into the gold final and Stringer into the bronze. And in the other semi-final, Allan shot straight sets wins 6-0 against Mcguane to earn his place in the gold.

In the bronze final, Stringer met 3rd ranked Mcguane. Stringer took an early lead with a 20 to Mcguane's 15 in end one, followed by 18 to 8 in the second end. Mcguane came back strong with a 22 end, however, it was not enough to beat his opponent's 28 end, giving the match to Stringer 6-0.

Allan and Jones met in the gold final to fight it out for the win. Allan took the first set with 18-14, and then Jones took end two with 20 points to Allan's 14. The third end was a close one, 18-19, which went in Allan's favour. The fourth end saw yet another close call with 17 points to 18. Once again, the end went in Allan's favour, winning him the match 6-2.

"Nobody ever comes to a National tournament expecting to win. So to do so is just incredible," Allan said.

CompoundÂ at the National Tour Stage 2

Sarah Prieels took the top spot for the compound women's after qualification with 677 points. She was joined in the final four alongside Ella Gibson, Phoebe Paterson Pine and myself. In the semi-finals, Prieels took the win against Paterson Pine with 146 points to 139, sending her into the gold final. Myself and Gibson met in the other semi-final match where we both shot 142 points to take it to a shoot-off. We both shot Xs, however, Gibson's was the closest to the centre to give her the win.

In the bronze final, myself and Paterson Pine shot for the third podium spot. We tied the first end on 28 apiece, and I took end two with 30 points to Paterson Pine's 25. In end three, Paterson Pine came back with a 29 to my 28 ends, bringing the gap between us to four points. The fourth end was tied on 29, as was the fifth end with perfect 30s each to finish. I retained my 4 point advantage to take the bronze final 145-141.

Going for gold were Prieels and Gibson. Both women tied the first two ends with 28s in the first end and 30s in the second. Gibson shot a 29 to Prieels's 28 in the third end to gain a one-point advantage. Gibson was able to extend this lead in the fourth end, shooting 29 points to Prieels's 26. The final end saw Gibson shoot a 30 to Prieels's 28, taking the match by six points with 145-139.

As for the compound men, the top seeded archer was Stuart Taylor with 677 points. Joining him in the final four were Dillon Crow, Matthew Wong and Jake Walsh. Taylor beat Wong in the semi-finals with 141-135, and Crow took the win in the other semi-final match against Walsh with 140-137.

Wong and Walsh met in the bronze final where Walsh took an early lead with 29 points to 27 in end one. The men shot the same score again in the second end, 29-27 in Walsh's favour, bringing his lead to four points. Wong shot a 28 to Walsh's 27 in end three, taking back one point from his opponent. Despite this, Walsh then went on to score higher in the final two ends with 28-27 and 29-28, taking the win from Wong with 142-137.

Â"I shot qualifying and was more than happy with 3rd. It's the best I've qualified at a national event, so just from there, I was on a win in my own head. Then in the matches, I calmed down and took them slow and steady. I was happy with each of the results and to come first was an amazing feeling,Â” Crow told us.

Recurve at the National Tour Stage 2

Yulia Larkins took first place in the qualification round with 605 points for the recurve women. She went into the final four during the head-to-heads along withÂ Malgorzata Sobieraj, Sophie Meering and Nicole Burdett. Larkins earned her gold match place, winning against Meering in the semi-finals 6-2. Sobieraj also won her semi-finals match against Burdett with 6-4, sending her to the gold final to shoot against Larkins.

5th ranked Meering and 2nd ranked Burdett met to shoot for the bronze medal. Burdett took the first end with 27-25, but Meering came back in end two with 25-24, bringing the set points all square at 2-2. The third end went to Meering with 26 points to Burdett's 23, taking her lead to 4-2. Burdett responded with a 24 to Meering's 22 to take the match back to a tie. It came down to the last end, where there was only a point in it deciding the winner. In the end, it was Burdett who took the final two points, bringing the match to 6-4, with 26 points to Meering's 25.

In the gold final, 3rd seededÂ Sobieraj met first seed Larkins for a chance at the title. Sobieraj took the first two lots of set points, shooting 29-27 in end one and 26-23 in end two. Four set points down, Larkin's responded with a 27 to Sobieraj's 25 to take the third end. Larkins then shot a perfect 30 in end four to bring the set points equal at 4 each. Once again, the result of the match came down to the fifth and final end where Larkins shot a 25 to Sobieraj's 23. She took the match win and the gold medal with 6 set points to 4.

Â"I'm very happy for the organisers and the archers that stage 2 of the National Tour could be held in Scotland this year. Despite the gusty wind conditions, I persevered with my new technique and was able to calm my nerves down when it mattered the most. It's the first time I've come first in both the ranking round and picked up the gold medal after the head-to-heads. I feel absolutely ecstatic and maybe someday my brain will finally catch up with what has happened,Â” Larkins said.

For the recurve men, the top place after qualification went to Steve Davies with 632 points. Alongside him, the final four archers left standing after the head-to-heads were Michael Judd, Patrick Huston and Monty Orton. The semi-finals saw Judd win 6-2 against Davies, and in the other match, Huston won over Orton 7-1 to earn his spot in the gold final with Judd.

The bronze final opened with a tie for Orton and Davies with 27 points each. Davies took end two with 28-25, and Orton took the third end with 29-26. Having found his rhythm, Orton didn't let another set point go in Davies's favour. He shot 27-25 in end four, and then 29-26 in the fifth and final end, taking the win and the bronze medal with 7-3.

The gold final match saw 2nd ranked Huston meet 5th ranked Judd. Huston opened with a strong 29 to Judd's 26 to take the first end. Judd came back with a 27 in end two, but it wasn't enough to take the set from Huston who shot a 28. Four points up, Huston finished the match with a 29 to Judd's 27, taking the win with straight sets, 6-0.

Â”Winning the Tour up in Scotland was a terrific experience. World-class shooting like my 115 against Monty is what is needed to guarantee a win at these events given how high the calibre of British archery is getting. I had a great time and want to thank the organisers for putting on such a great show and to all our Scottish friends for travelling down to our tournaments so often!Â” Huston said.