The eliminations are underway at the 2022 Para Archery European Cup leg 1 in Czech Republic. The team, mixed team and individual finalists are named, including some of our very own Great British archers. 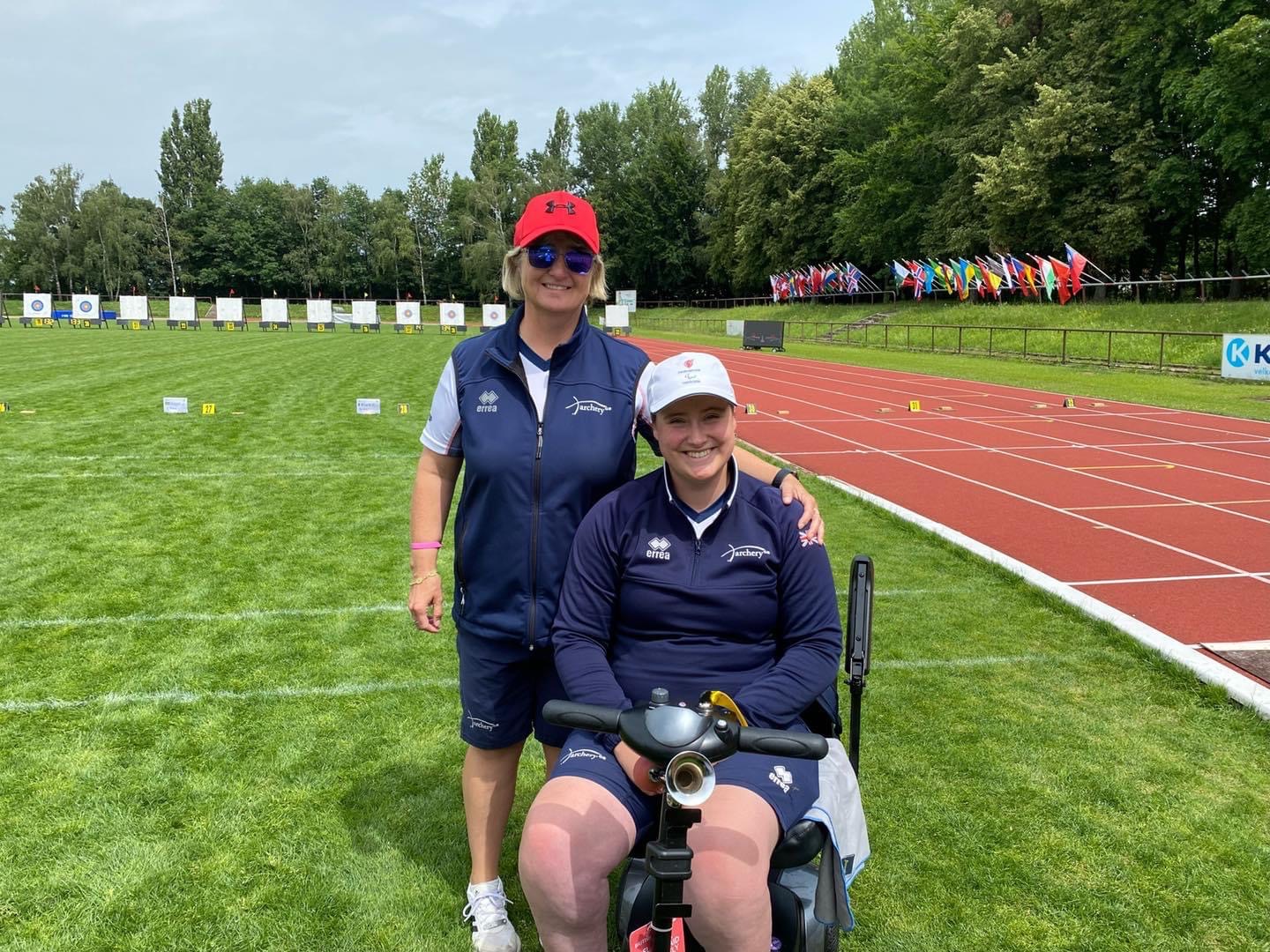 The athletes shot their way through to the medal matches for the team and mixed team eliminations during Wednesday's competition. And today, the archers were looking to take their luck from yesterday into their individual head-to-heads.

In the recurve open category, David Phillips won his 1/8 match 7-3 against Ukraine's Naumchuk. He then took his quarter finals match all the way to a shoot-off against the Czech opponent. Unfortunately, a 7 was not enough to beat Kostal's 10 to take the win. Two rounds before, Kostal shot against Cameron Radigan in the 1/16 match, where he sadly won over the GB archer 7-3.

For the recurve women open, Hazel Taylor won her quarter final match over Latvia's Melle 6-2. In the all important semi-finals, Hazel met the 1st ranked Japanese archer Shigesada, where she was unfortunately beaten 6-0. Hazel has earned her place in the individual bronze final on Saturday, her second of two medal matches for the week.

"I'm happy with how I approached the day today. My mindset was better than it's ever been. I'm looking forward to the finals field this weekend, and putting this week's learnings into practice for the European Championships in Rome next month," Hazel said.

The recurve men open team comprising of David Phillips and Cameron Radigan opened up the quarter finals with a flying start, taking the win against the Ukrainian's 6-0. In the semi-finals, GB took two set points against the team from America, but overall they lost 6-2. They have secured their place in the bronze final match on Friday where they will shoot against Thailand.

For the recurve open mixed team, Hazel Taylor and David Phillips had a close call in the quarter finals against Thailand. GB took the set points in end 1 and end 4, and the team from Thailand took ends 2 and 3 to take it to a tie. GB shot an 18 to their opponents' 15 to get into the semi-finals. They had yet another tight match that went to a shoot-off, this time against Japan. GB won one end, Japan won one end, and then the other two ends were tied. Japan's 11 was not enough to beat GB's 16, therefore sending GB into Friday's gold medal match to face the team from Italy.

Jessica Stretton for the compound women open also lost her first round in the 1/8, 137-145 in favour of the Japanese archer Shinohara.

Teammate Phoebe Paterson Pine won her 1/8 match, 141-135 against Kuncova from Czech Republic. Next she faced Pesci from Italy in the quarter finals. The Italian dropped a 27 and a 26 in the first two ends which Phoebe used to her advantage. She finished with a 30 in the last end to take the match 145-141. In the semi-finals, Phoebe met 3rd ranked Virgilio. They were drawing 55-55 after the second end, and after that Phoebe didn't drop a single point. Three perfect 30 ends earned Phoebe her place in her third medal match for the week.

Phoebe Paterson Pine and Jessica Stretton of the compound women's open team stormed ahead in their semi-final match against Czech Republic. They took a four point lead after just the first end which continued to extend with each end shot. 153 out of a possible 160 took the win over their opponents' 135, with an impressive 18 point lead. The GB women have earned themselves a place in the gold medal final where they will face the team from Poland.

The compound open mixed team comprising of Phoebe Paterson Pine and Jame Harris enjoyed a bye in the 1/8 round before coming up against Czech Republic in the quarter finals. GB took advantage of Czech's slow start shooting 36 to their opponants' 33. The British then shot two 38 ends, increasing their lead to six points ahead. Czech put down a perfect 40 in the final end, but it was not enough to the take the win from GB. We won with 151 points to 146, securing a spot in the semi-finals. The next match against Poland proved to be a much closer affair. The two teams were tied after end 1 with 39 apiece. GB was trailing by three points by the 3rd end. We put in a strong 37 to finish the match, however it wasn't enough to take the win from the Polish. 146 points to Poland's 149 will send Great Britain into the bronze medal final.

"Overall, I feel really happy to have made it this far at the tournament. Individual matches haven't been my thing in previous years, and it's only been since Tokyo that I feel I've come into my own in the individual event. One thing I'll be focusing on in my medal match is sticking to my process, even though it's alternating shooting. I'm going to use it to my advantage the best I can and do what I do out there on the finals field," Phoebe said.

W1 open woman Victoria Kingstone shot against Tereza Brandtlova from Czech Republic in the semi-final. Some consistent ends from the Czech archer saw her take the lead, winning the match 126-116, meaning that Victoria will shoot for the bronze medal on Saturday.

For the men's W1 open category, Martin Saych got to a great start, beating Jacniacki in the quarter finals 130-117. In the semi-finals, Martin met 2nd ranked Tamás Gáspár from Hungary. It was a close match throughout, and the two competitors were tying going into the final end on 104 each. A 29 from Gáspár versus Martin's 28 meant that the Hungarian took the win with just one point, 133-132. Martin will shoot for a bronze medal in the finals.

"I'm so excited about going into my first international medal match on Saturday. I've learned I can truly trust my shot and process, and I just need to stay focused and in the moment," Martin said.

In the W1 open mixed team, Victoria Kingstone and Martin Saych shot against Italy in the semi-finals. After the first three ends, the British were down by just one point, so all came down to the final four arrows. A 35 end from our archers versus the Italian's 30 was enough to overtake them and win the match with 137 to 133, securing another gold medal match place.

"There have been some encouraging performance in today's individual eliminations. It is great to have three athletes competing for individual medals. This trip is proving to be a great warm-up for the Para European Championships next month," coach, Andrea Gales, told us.