Paralympians Seize Chance to Say Thanks

Our Rio heroes took to the streets of Manchester and London to say thanks to the British public. Yesterday our Paralympic archers carried out one final Rio duty: visiting perhaps their greatest supporters, the Worshipful Company of Fletchers 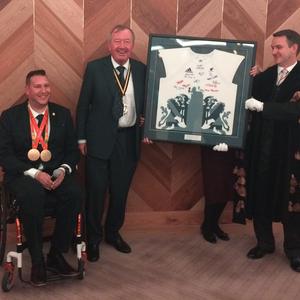 And they did not go empty handed. Double gold medallist John Walker presented the Company's Master, Stuart Fraser, with a Rio team shirt, signed by our Paralympic team, during a special lunch that followed a service of thanksgiving.

So how did the Worshipful Company of Fletchers help? Hilda said: "Without the support of the Company these guys would not have been in Rio and won the medals. There is a direct link."

Michael said: "It is great to be able to come here and say thanks because, for many of the team, their recruitment campaign was supported by the Company. They literally would not be here without them. The Worshipful Company of Fletchers paid for the arrows that won a gold medal, so to come here and show them the medals? Priceless."

Compounder Mikey Hall praised the Company for the warm welcome the team received. "It's fantastic," he said. They are really friendly and so helpful. I cannot thank them enough."

And recurver Tania Nadarajah said: "I think the hospitality the Worshipful Company of Fletchers has shown us can only really be outdone by the support they have given us in the run-up to Rio and for such a long time now.

"I am an example of what their funding has done. The Recurve to Rio programme that brought me to Archery GB was a Fletchers-funded initiative. Without something like that I wouldn't have been able to go to Rio and I wouldn't be able to do the things I'm doing with these wonderful people today.

"The Company has made a huge difference to this squad, helping virtually all of us, I believe, at some stage. We are eternally grateful to its members for all they have done and continue to do."

As well as helping our Paralympians and other archers buy equipment, for the past five years the Company has donated £12,500 each year towards identifying, training and preparing potential Paralympians for success and Pass It On courses for coaches.

It has also helped Archery GB's inclusion programme and given funding to Blind Veterans Archery section, to archery schools it set up for disabled children, to the British Wheelchair Archery Association and British Blind Sport.

You can find out more about the Worshipful Company of Fletchers here.