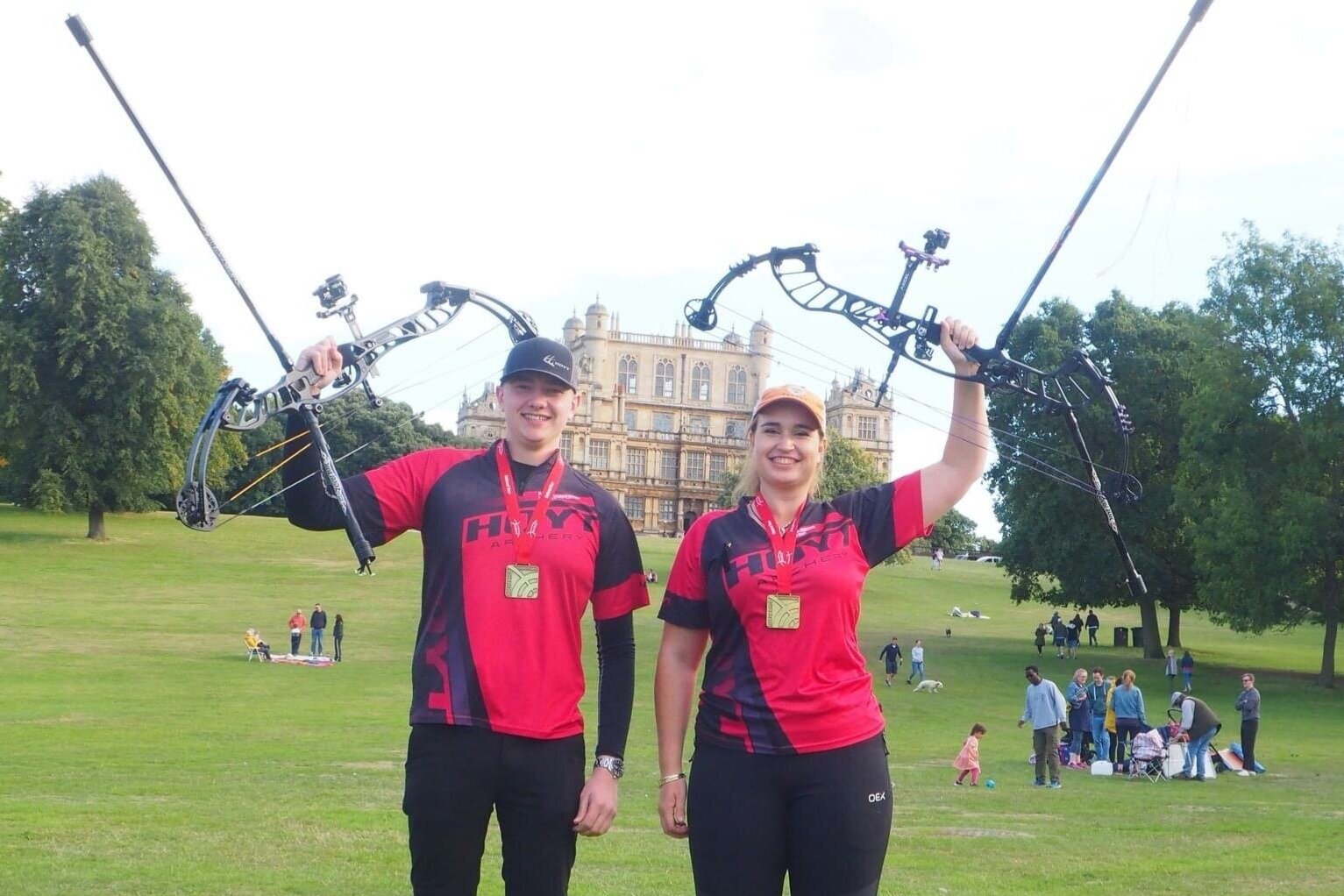 The first match to open the day’s shooting was the gold final between barebow women Helen Brown and Kim Doherty. For end one and end two, Helen shot two consecutive 23s to Kim’s consecutive 22s to take the match to 4-0. They then tied the third end on 21s, bringing the set points to 5-1. Kim then shot a 22 to Helen’s 21 to bring back two set points. In the final end, a tie on 23 apiece was enough for Helen to take the match to 6-4, naming her the first barebow women champion of The National Tour Final.

Onto the barebow men’s gold final, we saw Ralph Barwise shoot against Wilco van Kleef Bolton. Wilco took the first set win with 25 points to Ralph’s 17. The second end was very close, Ralph shot a 24 which wasn’t quite enough to take the set from Wilco’s 25. In the third end, a 27 from Wilco against Ralph’s 16 was all he needed to take the win with straight sets 6-0. Wilco is the first National Tour Final barebow men champion. 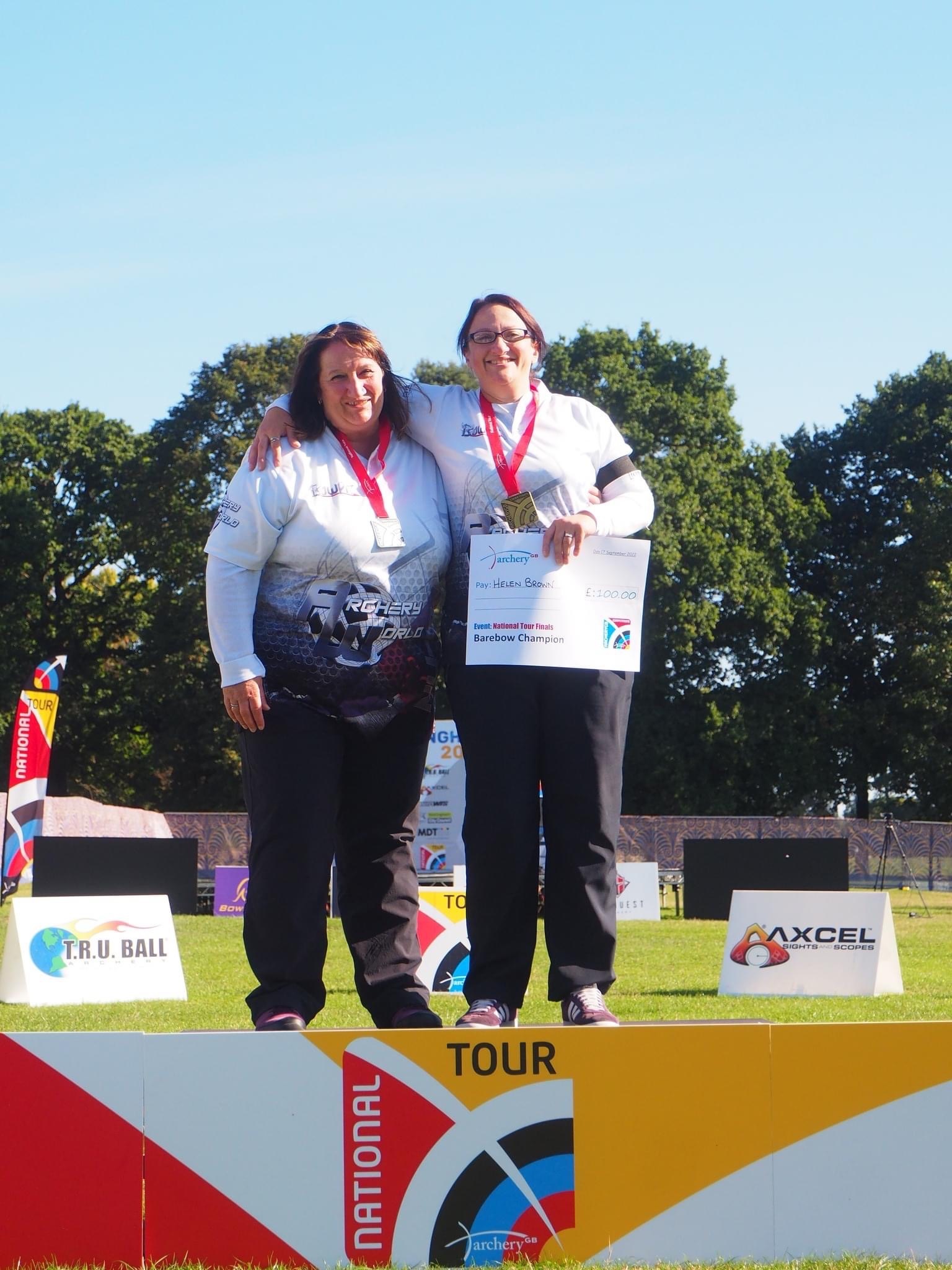 Third ranked Neil Bridgewater came up against last year’s bronze medalist, Chris White, in the third of the four quarter final matches. The men began the match with 26 points apiece, and then Chris took a three point lead after the second end by shooting a perfect 30 to Neil’s 27. Chris then shot two 25s for the third and fourth end, while Neil shot two 28s to take away two points from Chris’s lead. In the final, a 30 from Chris versus Neil’s 27 won Chris the match 136-134.

For the last quarter finals match, 2nd ranked Kai Thomas-Prause and debut finalist Dillon Crow fought for the last spot in the semi-finals. Kai opened the match with a perfect 30 to Dillon’s 26, and then a 29 to Dillon’s 27 in the second end to give himself a six point lead. Dillon responded with a 30 in the third end to Kai’s 25 to bring the match back to only one point in it, 84-83 in Kai’s favour. Kai then came back with a 29 to Dillon’s 26 to take his lead to four points ahead of the last end. A 26 from Dillon to finish wasn’t enough to beat Kai’s, sending Kai into the semi-finals, 143-135.

Going for the second place in the coveted gold final were Kai Thomas-Prause and Chris White. Chris opened with a 30 to Kai’s 27, and then a 28 from Kai against Chris’s 25 brought the match all square on 55 apiece. Kai then shot a 27 to Chris’s 24, taking Kai’s lead to a three point advantage. Chris finished the match with two 29s for end four and five, however a 28 and a 30 from Kai won him the match with three points to spare, 140-137.

Chris returned to the stage to compete for the bronze medal against Adam Ravenscroft. For end one and end two, both archers shot consecutive 28s, bringing the scores level at 56 apiece. Adam then shot a 30 to Chris’s 29 to take the lead with one point. Chris shot a 27 in end four, but another 30 from Adam pushed his lead to four points, 116-112. In the deciding end, the men matched each other arrow for arrow, shooting 29 each. This finished the match on 145-141 in Adam’s favour, rewarding him with the bronze medal.

In the pivotal gold final, the defending champion for two years running, Adam Carpenter, met the 2021 4th place archer, Kai Thomas-Prause. Kai started with a 29 to Adam’s 28 in the first end, and then Adam shot a 29 to Kai’s 28 in the second end, keeping them both on 57 points each. Adam shot a 30 to Kai’s 29 to take a one point lead in the third end. Another 30 from Adam in end four to Kai’s 28 took Adam’s lead to 117-114. The two men tied on score in the last end on 28 each, which concluded the match on 145-142 in Adam’s favour. Adam will come home with the gold medal, defending his title for the third time over three consecutive years.

"My first match was very tricky in the wind. I handled it quite well, but some shots did get away from me. The second match was a little better as I got more comfortable knowing what the wind was doing and the feeling of being on the stage. There were a lot of nerves during my gold final as I knew that I was on for my third National Tour Final win in a row. I definitely felt the pressure. Overall, it could have been better, however when facing the wind you do as best you can. There’s always room for improvement. This win has really boosted my confidence massively which will help me for future events. To win this three times, just to win it once was fantastic. I was hoping I was going to do it, but I still wasn't expecting three times in a row, so I could not be happier right now,” Adam said. 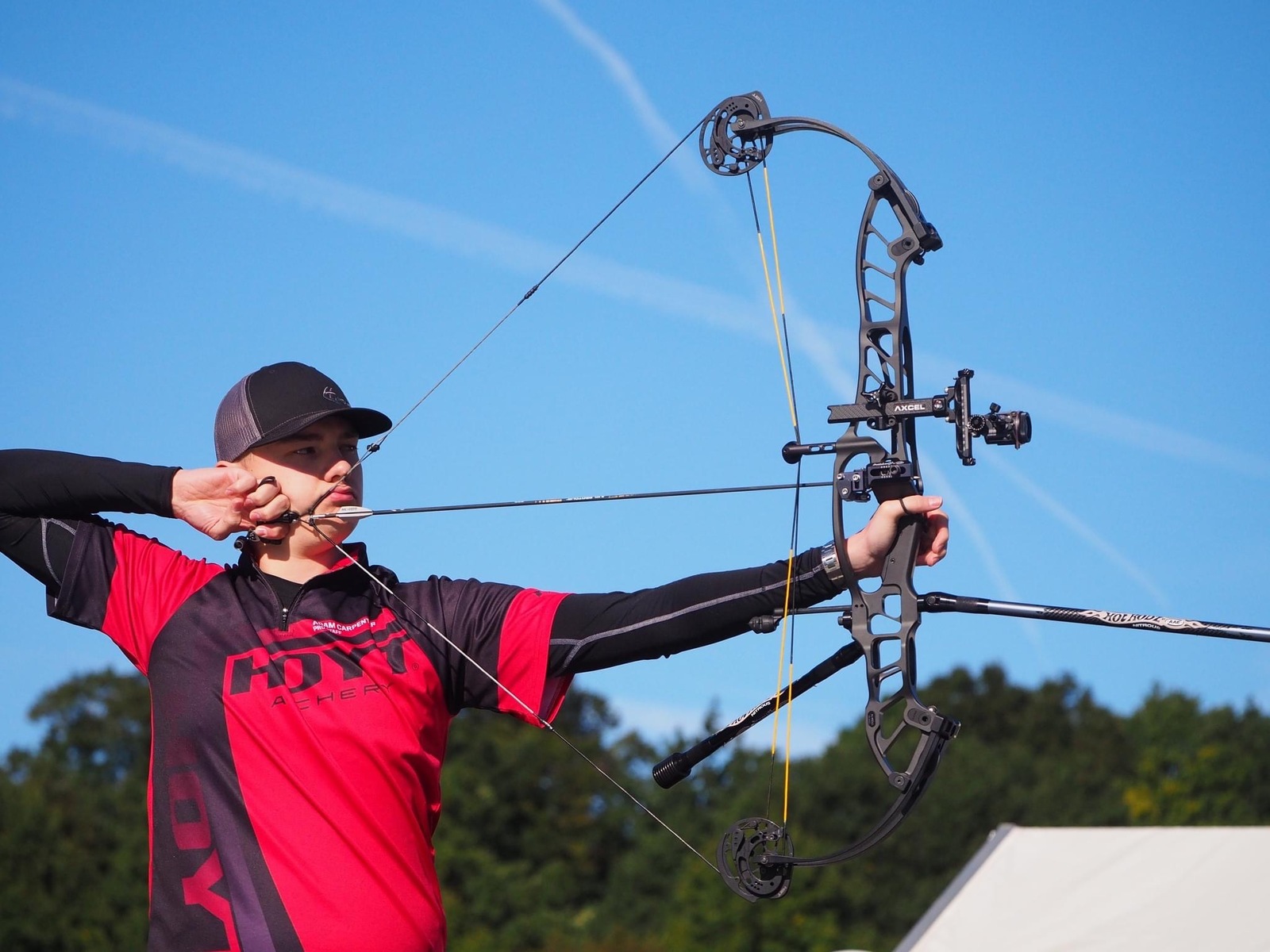 For the first compound women’s quarter final, we saw 1st ranked Ella Gibson meet European Under 18 Champion, Hallie Boulton. Ella began with a 27 to Hallie’s 25 to take a two point lead. In end two and three, Ella shot two 30s to Hallie’s two 28s to further her advantage to six points. The women tied the fourth end on 29 apiece, and in the final three arrows, Ella shot a 29 to Hallie’s 28 to finish the match 145-138.

Up next was 4th ranked Sarah Prieels and 5th ranked Liz Foster. Sarah shot a 28 to Liz’s 24 in the first end to gain a four point lead. For ends two and three, Sarah shot consecutive 29s to Liz’s two 27s, extending her advantage to eight points. Liz responded with a 30 in the fourth end to Sarah’s 28, bringing the match to 114-108 in Sarah’s favour. A tied end on 29s for the last three arrows saw Sarah take the win 143-137.

The third of the four quarter finals brought together 3rd ranked Layla Annison and the European Under 21 bronze medalist, Grace Chappell. A 29 from Layla to Grace’s 24 gave Layla a five point lead from the first end. Grace responded with two 28s, however Layla shot two 29s to push her lead to seven points. Layla then shot two 28s for ends four and five which was enough against Grace’s 26 and 27 to win the match 143-133.

Last up for the quarter finals was Paralympic champion, Phoebe Paterson Pine, and 2nd ranked archer Izzy Carpenter. Izzy opened with a 30 to Phoebe’s 28, but then Phoebe responded with a 29 to Izzy’s 26 in the second end to bring the scores to 57-56 to Phoebe. A 29 in end three to Izzy’s 28 extended Phoebe’s lead to two points. The fourth end was tied by both women on 29s apiece, keeping the difference between them at two points, 113-115. A 29 from Izzy to Phoebe’s 27 was enough to take the match to a tie on 142 each. In the shoot-off, a ten from Izzy against Phoebe’s nine sent her into the semi-final round.

In the semi-finals, world number one, Ella Gibson, faced world number eight, Sarah Prieels. Ella started with a clean 30 to Sarah’s 28 to gain a two point lead after the first three arrows. For the next three consecutive ends, both women scored three 29s each, keeping the space between them at two points. In the final end, a 30 from Ella meant that Sarah’s 29 wasn’t enough to send her into the gold. Ella took the first spot in the gold final with 147-144.

Fighting for the last place to go for the top spot on the podium, Izzy Carpenter met Layla Annison in the semi-final. Layla opened the match with two 30s to Izzy’s 28 and 29, giving herself a three points lead after two ends. Izzy then shot a 30 in the third end to Layla’s 29 to bring Layla’s lead to two points, 89-87. The women then tied the fourth end on 29 points apiece. In the last three arrows, a perfect 30 from Layla to Izzy’s 29 won her the place in the gold final, 148-145.

Fifteenth world ranked, Izzy Carpenter, came straight back onto the stage to face world number eight, Sarah Prieels, to name this year’s bronze medallist. The two women tied the first end on 28 apiece, and then a 30 from Izzy in the second end to Sarah’s 28 gave her a two point lead. The third end was another tie with both archers shooting 28s, taking the scores to 86-84 in Izzy’s favour. Sarah responded with a 29 in the fourth end to Izzy’s 28, bringing the difference between them to just one point going into the final end. A 29 from Izzy with her last arrows to Sarah’s 27 won her the match and the bronze medal, 143-140.

The last match of the day, the compound women’s gold final, saw Ella Gibson and Layla Annison go head to head. Layla took a one point lead after the first end with a 29 to Ella’s 28. In the second end, role’s reversed with Ella shooting a 29 to Layla’s 28, taking the scores to 57 apiece. Ella managed to gain a one point lead over Layla in the third end, shooting a 28 to Layla’s 27. Having found her rhythm, Ella shot a 30 in the fourth end to Layla’s 28, overtaking further to 115-112. The last six arrows of the day saw a 26 from Layla, which wasn’t enough to catch up to Ella’s 29. Ella will be taking home this year’s gold medal and top spot on the podium.

“Today was a great experience for me going into the World Cup Final. We’ve had such a big break since the last World Cup, it kind of makes it feel like it’s the beginning of the season again. You get all of those beginning of the season nerves. The finals and set up here was amazing, they’ve done a really great job. The finals field, the staging and all the stands and everything was great; It was great to be able to see this again in the UK and at our national events, and I hope we have more like this going forward,” Ella told us. 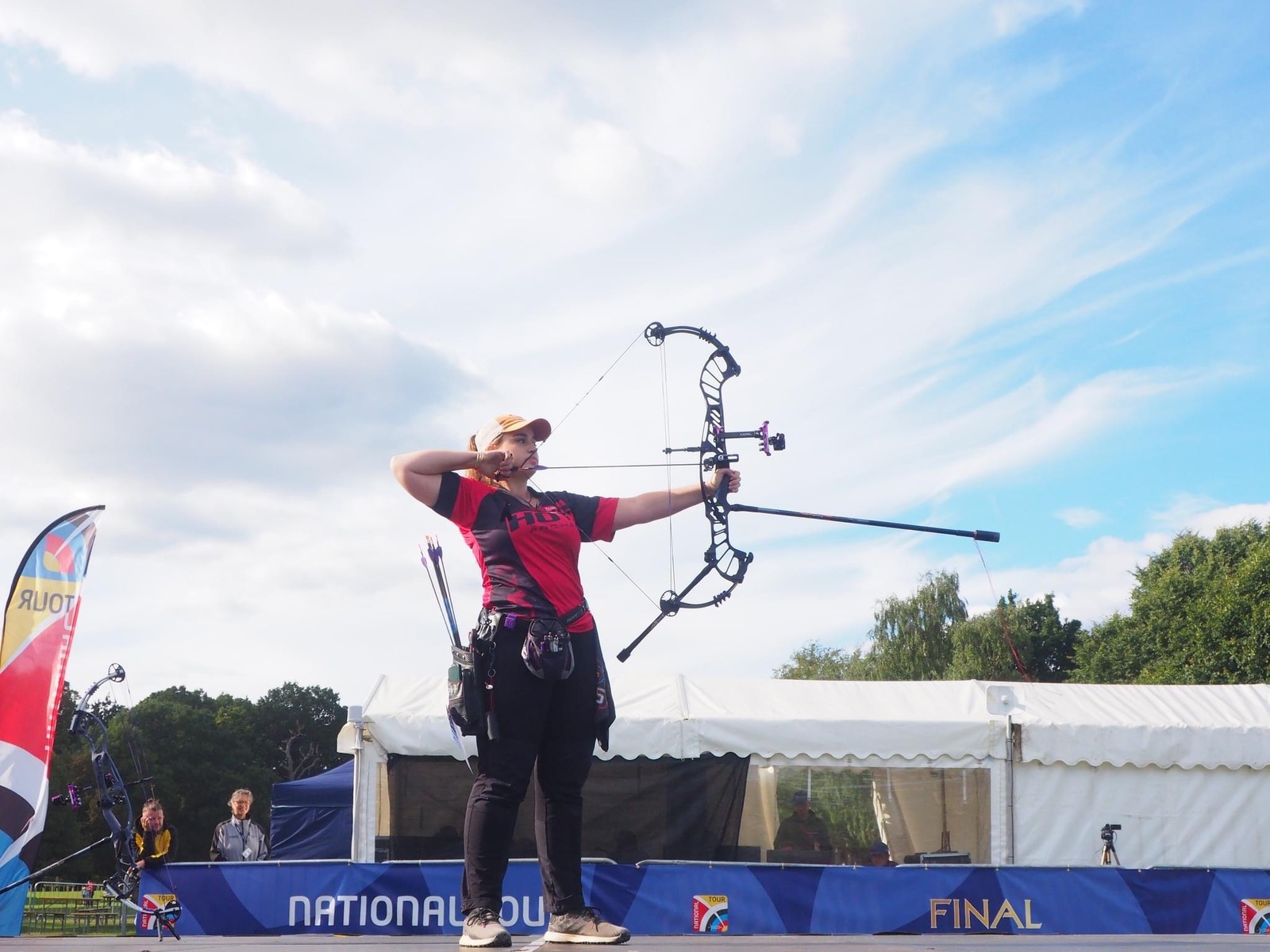