Archery first appeared in the Olympic Games in Paris 1900. Archery is a truly historic sport with its roots in its use as a weapon of hunting and warfare. Read about the history of Olympic archery, equipment and targets used and how archery athletes qualify for the olympic games.

Archery first appeared in the Olympic Games in Paris 1900

Archery is a truly historic sport with its roots in its use as a weapon of hunting and warfare.

Despite this rich history, archery was not present in the first Olympic Games in Athens, 1896. Archery first entered the Olympic programme in Paris in 1900. Between 1920 and 1972 archery was again off the programme, before enjoying a revival thanks to the work of the Fédération Internationale de Tir à l’Arc, or FITA (now called the World Archery Federation).  Archery has been present at the Olympic Games ever since, although recurve archery is the only discipline that features.

Olympic archers shoot at a 122cm diameter target from a distance of 70m back. To achieve maximum marks they must hit the gold centre ring – the ten ring - which measures just 12cm.

FITA, renamed World Archery in 2011, organises events, sets the rules, and provides qualification guidelines as well as judges for the archery events.

Learn more about the Olympic Pathway for archers through Archery GB 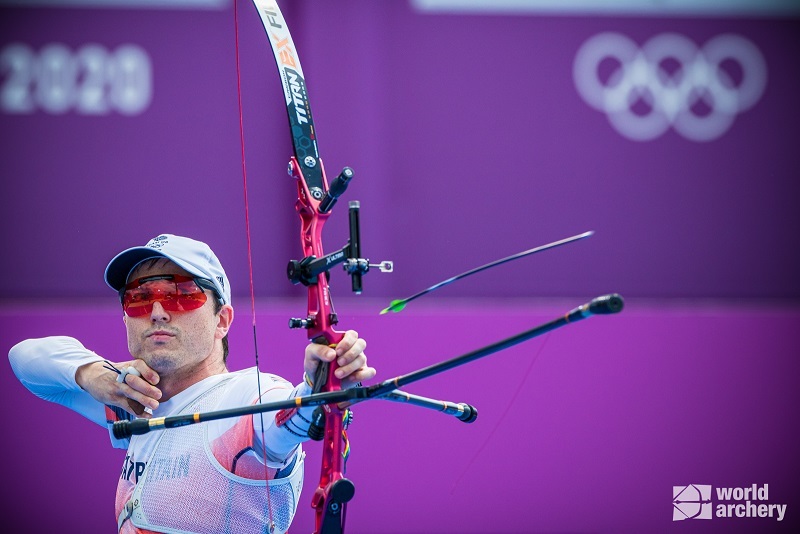 The bows used in the Olympic Games are takedown recurves, meaning the limbs can be removed from the riser.

Mechanical sights are permitted but they must not have optical enhancements. Archers are also allowed to use stabilisers, and clickers, which help the archer to release the string consistently.

The target is a five colored target, 122cm in diameter. There are ten coloured scoring rings, each 12.2cm in width, with each colour consisting of two rings. The inner colour, gold, scores 10 points for the innermost circle and nine points for the next circle. Red rings are worth eight or seven points. The blue rings score six or five points and black scores four or three points. Finally, white scores two or one point. Arrows hitting the target but not hitting inside the rings, or arrows missing the target altogether, are a miss. 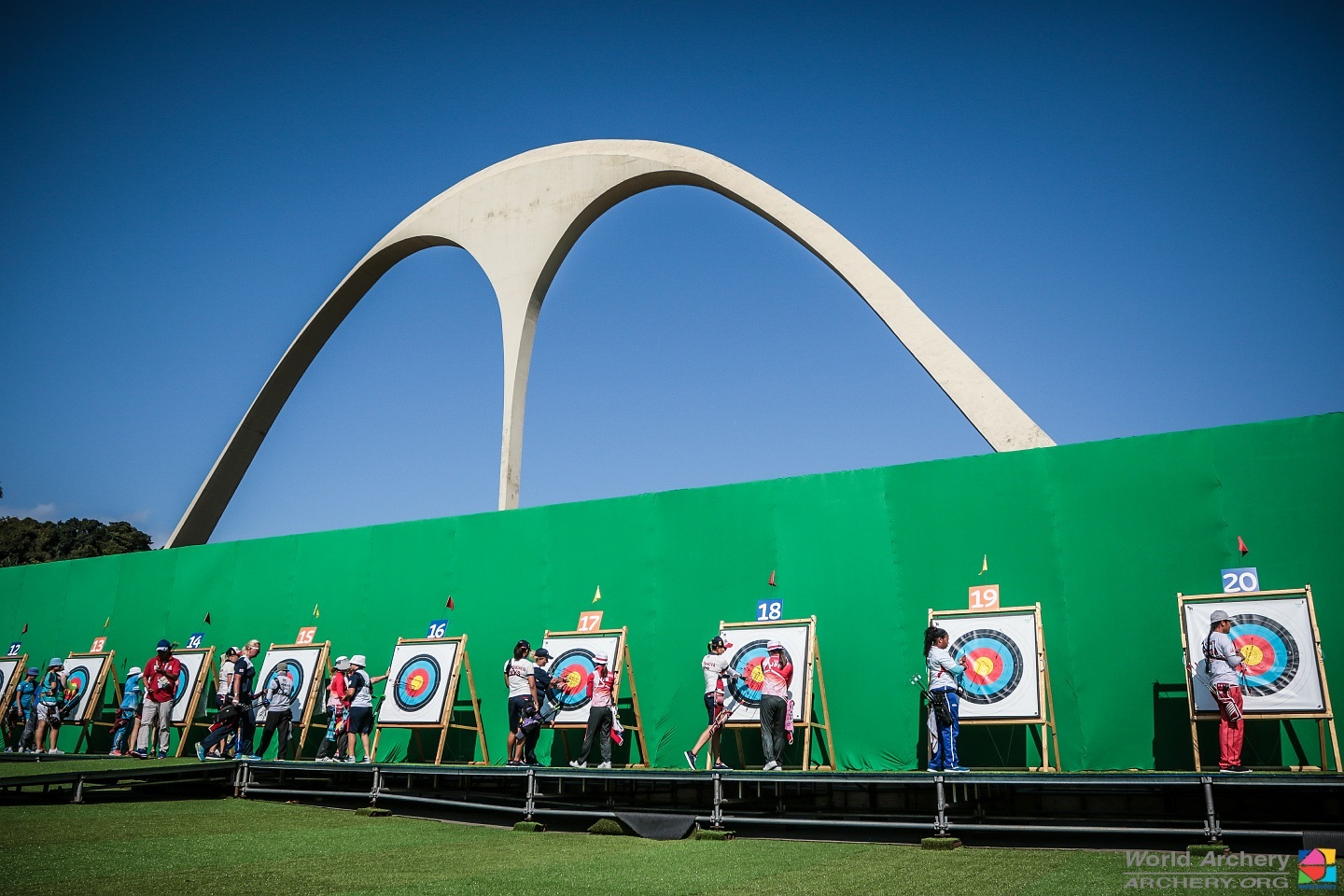 In the ranking rounds, athletes shoot 72 arrows, in ends of six arrows each, with the total scores ranking the archers from one to 64. This provides the seeding for the elimination brackets.

In the next phase, elimination rounds comprise sets of three arrows each. Two athletes shoot against one another, with the lowest scoring archer leaving the competition and the higher scoring archery advancing to the next round. Archers have 20 seconds to shoot each arrow, shooting in turns of one arrow each.

Athletes win two points if they have the highest score in the set, and each athlete is awarded one point if the set is a draw. The first athlete to score six points wins the match. In the event of a tie there will be a 1 arrow shoot off where each athlete will shoot 1 arrow each. The athlete whose arrow is closest to the centre wins the match.

There are 2 team events in Olympic archery - the 3 person team event comprising three athletes of the same gender from the same country, and the mixed team event comprising one man and one woman from the same country. The combined ranking round score of the athletes is used to rank the teams from one to 12 in the three person team and from one to 16 in the mixed team, giving the seeding for the elimination brackets. These brackets progress like the individual competition.

Team matches are also decided using the set system, but with athlete shooting 2 arrows each instead of three. Arrows are shot alternating between each group. After the first team shoots one arrow each, the second team shoots. Finally, both teams repeat the process for a second group. The team with the highest score receives two set points. If tied, each team receives a point. The first team to five set points wins the match.

The match consists of four ends of two arrows each for each archer in the team. If the teams are tied, each athlete in a team shoots one arrow. The team with the highest total score is the winner, if the teams tie on score then the arrows closest to the centre are measured to determine a winner. 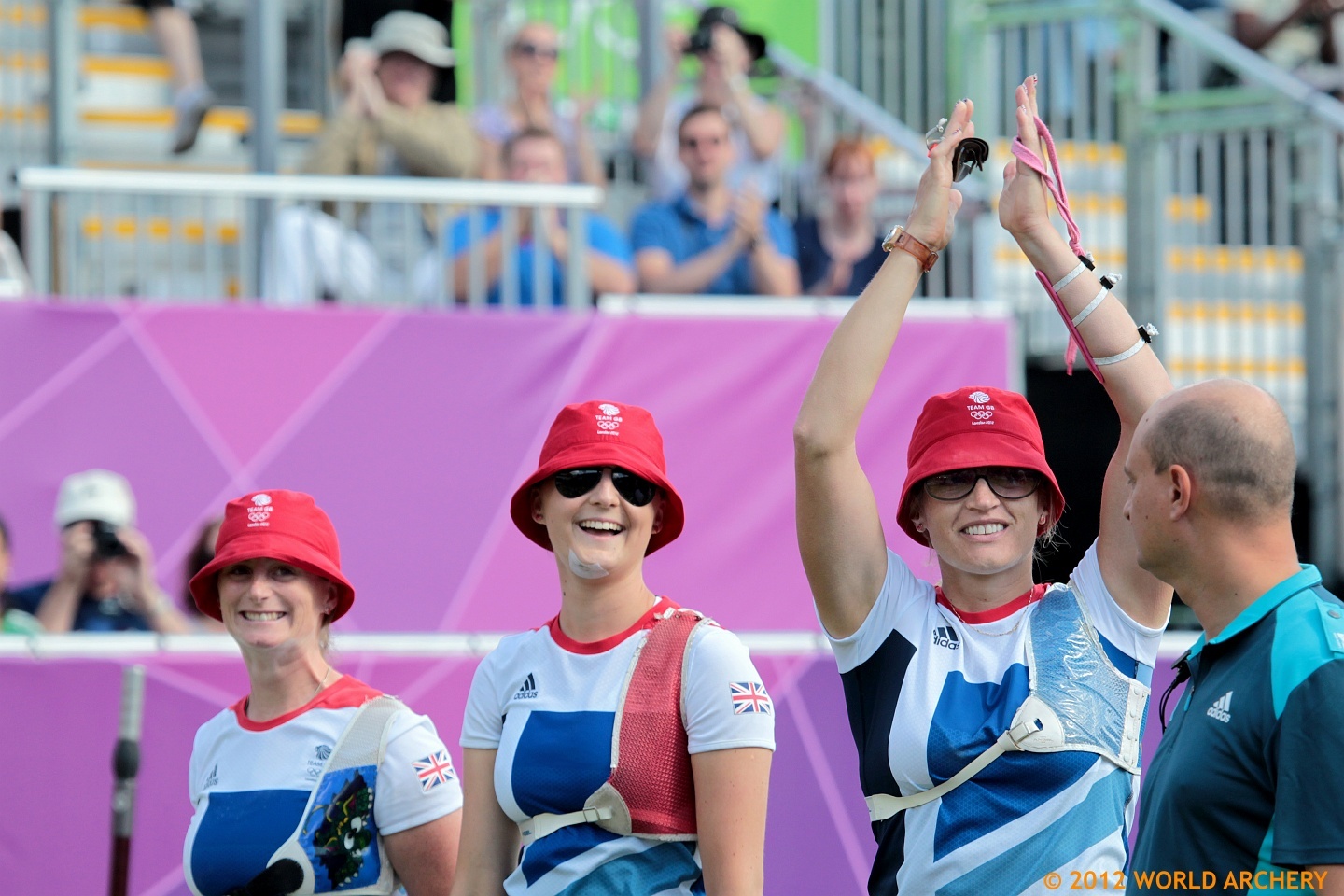 There are a further 5 mixed team spots available, qualifying each nation one men’s and one women’s spot, at each of the continental games.

There are an additional 18 individual qualification spots for each gender, bringing the total number of competitors in each individual event to 64. Three of these spots are awarded at the World Archery Championships. Additional spots are awarded through continental qualifying tournaments, continental games and the final World qualification tournament. The final three places for each gender are reserved for the Tripartite Commission invitations.

Since archery was on the Olympic Games programme, Team GB archers have won a total of nine medals: two gold, two silver and five bronze.