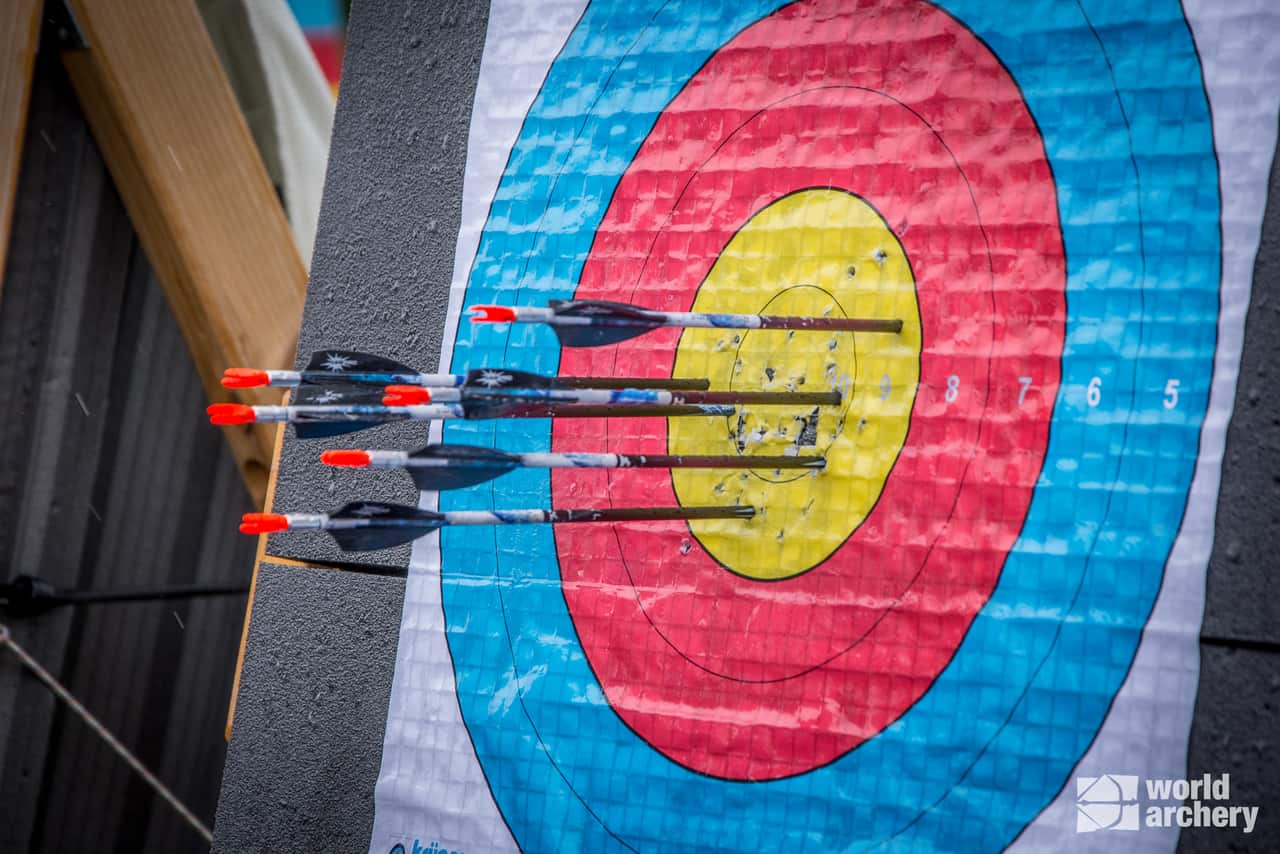 It was a wet start to the European Championship qualification day. Waterproofs and umbrellas were present, along with big scores!

Simon Scott, Compound Coach, told us "I'm very happy with today's performance from the compound team. We had a lot of rain in the morning, which made it tough for staying warm. And with a lot of breaks for face changes breaking the rhythm. Tomorrow is where the real work begins, and a lot of the archers and teams are in a good position in the draw."

First up for the European Championship qualification were the compound archers. The day was wet and mild to kick off the championship week. Ella Gibson ranked first in GBR and also qualified first with a score of 709 and 31x. Jessica Stretton had a strong qualification with 690 and finished second in the GBR women and 14th overall. Izzy Carpenter ranked 28th overall with 677.

Ella told us, "My first two dozen were rough, but after making a minor adjustment to my draw length I felt much happier and confident with my shooting. I managed to finish the round nicely. It's great to start the week with a solid qualification round in a lot of rain! I'm just taking the week one day at a time."

In the men, Adam Ravenscroft ranked first for GBR with 699 and a 25th place rank overall. James Mason was just behind with two less 10s, also on 699 in 27th place. Stuart Taylor ranked 40th overall with a score of 694.

The compound women's team secured a second place rank and will face either Denmark or Ukraine on Thursday in their matches. The men will shoot against Slovenia in the 1/8 matches on Thursday. James and Adam were part of the team who won team gold at the 2018 European Championships in Poland. Adam and Ella are shooting in the mixed team against either Austria or Iceland in the 1/8 matches.

Naomi Folkard, Performance Coach - Oly, told us, "The conditions were pretty good today, a changeable breeze. Which meant the athletes had to keep on their toes. It was overcast and a comfortable temperature.

"The men all started qualifying well and shook off the nervous energy quickly. The momentum swung both ways during the round for all men at different times. The women all shot to their potential, and in the second half, there weren't many points left behind. I'm truly humbled by Penny's performance today. I'm looking forward to seeing how the rest of the week unfolds."

Penny Healey stole the show today for the recurves. Ranking second overall with a 667. She told us, "I'm over the moon and hope to keep it up throughout the rest of the week! Everything went right with my shots, and I'm really happy with my second half." Penny had the highest 10 count on the recurve women's field.

Jaspreet Sagoo was next for the GBR women, ranking 14th with 651 and Bryony Pitman in 17th with 646.

The women's team ranked 2nd and will face either Switzerland or Lithuania. While the men ranked 10th and face Latvia in the first round.

Penny and Patrick will be shooting in the mixed team against Finland or Romania.

How does the rest of the week look?

Friday is the European Games 2023 Qualifier, with more details to follow closer to the time. And finals on Saturday and Sunday.