The four champions of the 2021 TRU Ball Axcel Back2Back event are crowned after a full day of nerve-racking head to head matches. 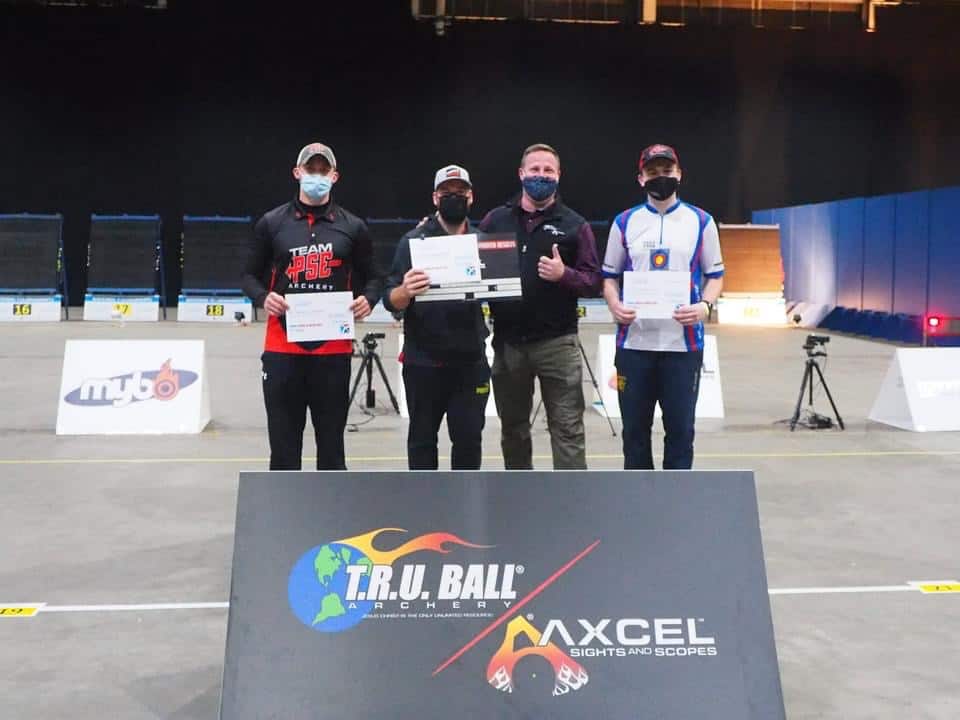 The TRU Ball Axcel Back2Back began with four groups of six archers per category. Every archer went head to head with each of the other people in their group.

The matches were shot on a WA18 face with a total of 120 points up for grabs. They had 90 seconds for three arrows, and four ends were shot per head to head. Points were awarded to determine the top two archers in each group: two points for a win, one for a draw, and none for a loss.

Across the groups, the top four archers based on score also made it through. The same process was used for the second round of shooting, but this time there were two groups per category, and only the top six made it to the final.

The recurve women opened up the finals, and this part of the competition differed slightly from Back2Back events of the past. The archers shot a Vegas-style face where the inner (compound) ten scored eleven points, and the outer ten ring scored ten for all bow styles. Three arrows per archer were shot in the allotted 90 seconds, and the archer with the lowest score was eliminated.

In the end, it was Gaby who took the win with a 30 to Healey's 28. She got through to the finals on a high, almost perfect, amount of match wins.

Â"It feels really nice to win the competition. I was nervous in the beginning, but I'm just really happy with what I did,Â” Schloesser said.

Next up were the recurve men with the final six: Tom Hall, Alex Wise, Keith Harding, Patrick Huston, Monty Orton, and Conor Hall. After four closely fought ends of shooting, Tom Hall shot an almost perfect score of 32 to win against Alex Wise's 29. Keith Harding took home the bronze. Hall made it into the top six on points in round one and then beat his opponents on the score in the second round of shooting.

Â"It's a huge relief in some ways. I think I was struggling during the group stages.Â To get the win in the final, I'm really happy that I pulled it out and started shooting well,Â” Hall told us.

Onto the compounds, the women were first with Ella Gibson, myself, Liz Foster, Bayley Sargeant, Sarah Prieels, and Lucy O'Sullivan. The ends became closer and closer with mere points separating us as each end passed. In the fourth end, Liz's 30 earned her the bronze medal, leaving myself and Ella to fight it out for the gold.

It came down to the last arrow after four clean elevens between us, and a nine from me awarded Ella the gold. She entered the final round as the second seed behind Sarah Prieels, having shot clean match wins throughout the day.

Â"It feels great. It was definitely a long, nerve-racking day, and I'm really glad that I managed to get through and win it,Â” Gibson said.

Finally, to cap off the day we saw the much-awaited compound men's final. The top six going into this round were Mike Schloesser, Domagoj Buden, Callum Platt, Adam Carpenter, Adam Ravenscroft, and Simon Scott. Platt's 31 was not enough to beat Buden and Schcloesser's 32s, so he came away with 3rd.

In the last end, Schloesser finished off the day with a clean 33 to take the TRU Ball Axcel Back2Back title. He came into the finals as the top seed, by winning all but one match for the entire day. Adam Carpenter was able to shoot a perfect 120 against the Dutch archer in the second round of competition.

Â"It was really awesome. I had some tough matches, and I really enjoyed it. It was a very nice format,Â” Schloesser told us.

Thank you to our amazing sponsor for the event: