Improve Your Game - How to aim with an English Longbow

Alex Newnes is a frequent medalist at National events, field, target and 3D. For Improve Your Game this week, Alex breakdowns the different ways to aim with an English Longbow. 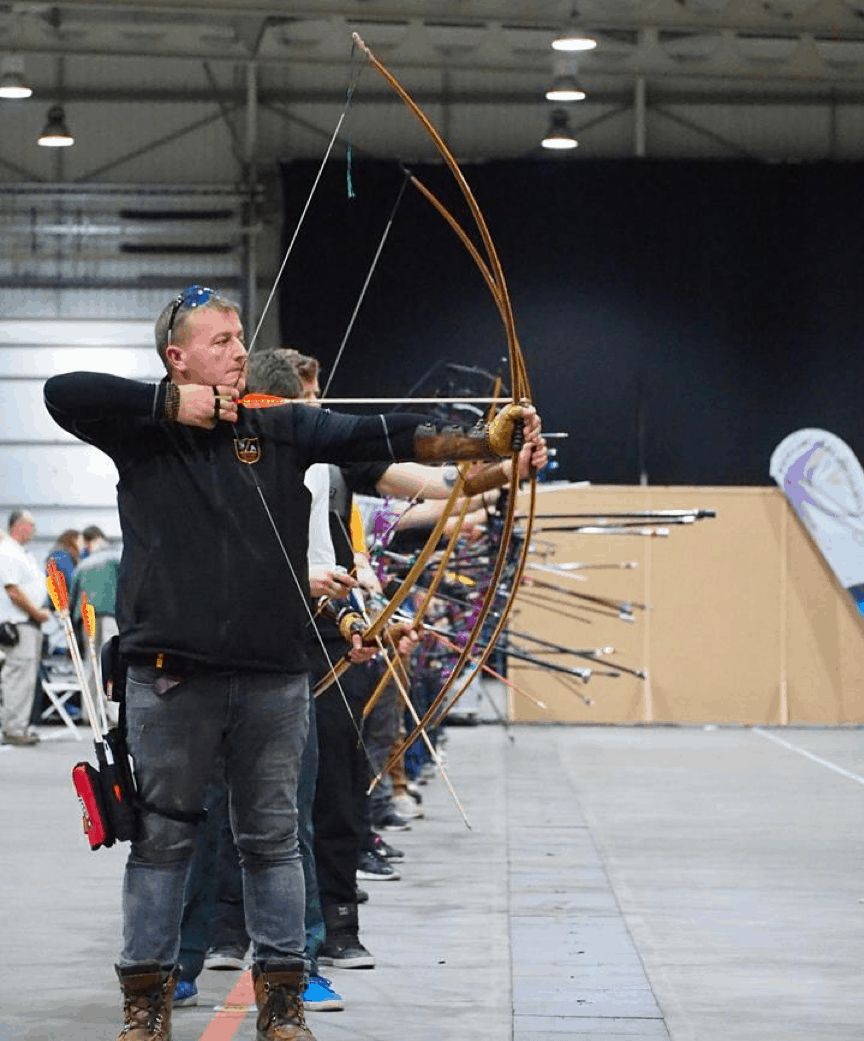 How to aim with an English Longbow

The English longbow is one of the most primitive, yet iconic, bows you can see on the shooting line both in clubs and at tournaments. Achieving accuracy with a longbow can be difficult at the best of times and daunting to archers who are new to the style.

However, for target archery here in the UK there are three main ways you can aim and shoot an English longbow which allows archers to achieve consistency and accuracy. Â‘Gap Shooting', the Â"O RingÂ”, and the Â‘Ground Marker'

Gap shooting is often the first aiming method taught when learning to shoot but is still widely used among traditional archers. This is particularly true in field archery where aiming methods that require a sighting aid are not permitted.

In gap shooting, we are looking to place our arrow point at a certain distance beneath, on, or above the center of the target in order for our arrow to hit the center when released. Due to the trajectory of the arrow, the Â‘gap' changes with distance. It gets smaller and smaller until you reach your Â‘point on distance', (30m for me, with my 40lb Gary Evans with a corner of the mouth anchor), after which you need to Â‘stack' your gap on top of the center to get your arrow to drop into the target (e.g., 60cm above center at 90m with my 52lb bow).

You can manipulate your gaps to some extent by changing the length, weight, fletch size etc. of your arrows - but I will cover this on a post exclusively about gap shooting for field archery!

When using this method for aiming, what we are essentially doing is adding a mark to the upper limb to use as a primitive sight. This is almost a throwback to the Victorian target method and the birth of sighted target archery. What we do is use a rubber Â band, loom band, O ring, etc. which we then place at the center of the target (or a particular reference point) when at full draw, in order to hit the gold.

Currently, this is arguably the most popular method of target style archery with an English longbow. This enables us to shoot with an under the chin style recurve anchor point as the size of the Â‘gap' becomes insignificant.

When practicing, roll the band up and down the limb until you find a spot that enables you to hit the center at your chosen distance. Once you have found a consistent mark, you should use a ruler or something of that nature to mark down the distance from the top of the handle/arrow pass to the band. I've also seen people mark the back of their bows! (Not the belly! Multiple deliberate marks are not allowed).

To use a ground marker, we need to think back to gap shooting. If you shoot a fast bow or use an under the chin anchor point, it is quite likely that your Â‘gap' will be quite a distance underneath the target and in the middle of the sports hall floor (or field) that you're shooting in.

A ground marker is basically an object (6x3Â” max) that you place on the range at the start of the round that you use as a reference for your arrow point. Unlike when using a band, you cannot adjust your ground marker mid-end and must wait until it is safe to collect your arrows to make any alterations. This means that a poorly placed marker can cost you an ends' worth of arrows, however, this would be my only criticism of this method.

It can be very refreshing not focusing on the gold! The O ring method allows you to focus on the gold and keep your eyes on the center of the target while you execute your shot, which suites a lot of people (myself included a lot of the time!), but with the ground marker, you are just focusing on placing the point of your arrow on a particular mark on the range.

This can be helpful for archers who struggle with target panic or become Â"gold shyÂ”. Personally, I like to chop and change all the time!


Which one works best!?

What method is best!? I don't think anybody can really say. Generally, the ground marker and O-ring method are producing the highest scores for target archery as the reference of the marker makes for greater consistency when compared to gapping (gap shooting).

What I tend to recommend to new-comers is that they try using an elastic band first as it is generally the easiest to get your head around and gives an archer a consistent reference point not too dissimilar to a recurve sight (or at least the way in which you use one). Once comfortable shooting a longbow, shoot all three methods and decide for yourself which method you prefer!

In case anybody has noticed - I have deliberately left out Â‘instinctive' as an aiming method. I am not an instinctive archer and it is not something I regularly practice and therefore cannot give any advice on it.Â  All I can say is that when I started, everybody was shooting with one of the above three aiming methods and so that's what's I pursued.