Lizzie Does the Double

Lizzie Foster has strengthened her grip on the top of the Archery GB National Series compound women's rankings by doing the double. 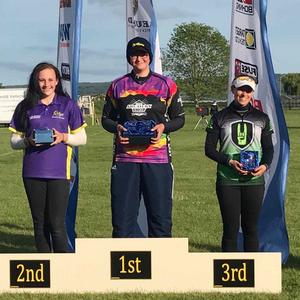 Yesterday she defeated Lucy Mason to take the stage 1 honours. Today it was Layla Annison who had to be satisfied with a silver medal as Lizzie secured stage 2 gold at the event, hosted by Evesham Archers.

Fourth ranked Layla, of Norfolk Bowmen, defeated Iulia Petre, Erin Prior, Kirsty Robb and top seed Lucy O'Sullivan to reach the final. But there was no stopping Lizzie who took her second title with a 142-138 win. The bronze medal went to Lucy.

There he faced last year's silver medallist, Adam Ravenscroft. The ninth seed had seen off Mark Speight, Duncan Busby by a single point, Tapani Kalmaru and James Howell, again by a single point, to earn his place. It was a tough match but James took the honours with a 145-141 win. James won bronze.

The fifth seed had, in turn, beaten Timothy Jackson, Francis Berti, David Phillips, Thomas Cram in a shoot-off and Alex Wise in another shoot-off. But Ashe scored a 7-1 win to claim the title. Alex beat Ryan to bronze.

Sixth seed Lizzie, of Kirby Muxloe, had battled past Melissa Smallman, Eva Henderson-Hirst, stage 1 winner Johanna Meyer and beat second seed Jaspreet Sagoo in a shoot-off to win her place. But Sarah had the edge in the final and took gold with a 7-3 win. Sarah Smith beat Jaspreet 6-2 to take bronze.

You can find the stage results here: