Nominations are now open for the BBC Young Sports Personality of the Year - and we think a certain 16-year old who led Britain to an historic clean sweep at the Paralympics ought to be in with a shout. But we need your help. 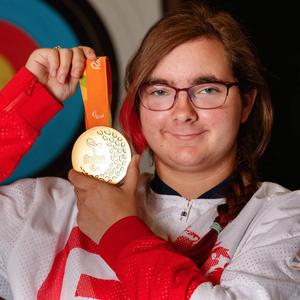 Jess Stretton and her teammates Jo Frith and Vicky Jenkins, were responsible for one of the most iconic moments in Rio. By winning W1 gold, silver and bronze they guaranteed that three Union flags fluttered together at the Games - the first time that had happened in decades.

Now we have a chance to remind Great Britain of that moment by nominating Jess as our Young Sports Personality of the Year.

It has been a year of fantastic achievements by young British sportspeople, but we think that winning Paralympic gold only days after getting her GCSE results makes Jess something special.

After winning gold she said: "This is an amazing experience and opportunity. I guess I was pretty nervous - I felt like I was taking a step for the youth, showing them that it can be done and it will be done."

If you agree that Jess is an inspiration, the next step is simple: nominate her for the BBC Young Sports Personality of the Year award. And the more of you that do it, the better! You can find out more about the award here.

You can nominate by downloading and filling in this form and emailing it to sports.personality@bbc.co.uk or posting it to YOUNG SPOTY 2016, 3rd Floor, Quay House, MediaCityUK, Salford Quays, M50 2QH.

Nominations close on Friday, 11 November 2016. Nominations are made to the BBC and by sports governing bodies via the Youth Sport Trust.

The winner of the award will be announced during this year's BBC Sports Personality of the Year, which will come live from the Genting Arena, Birmingham, on Sunday, 18 December.

Last year's winner was gymnast Ellie Downie. She became the first British female to win an individual all-around medal for Great Britain at the European Championships, claiming bronze at the age of 15.