Yesterday 150,000 people braved pouring rain in Manchester to cheer our Olympians and Paralympians. Today they were lauded in Trafalgar Square - and tonight there was a right royal end to celebrations with a reception for medal winners at Buckingham Palace. 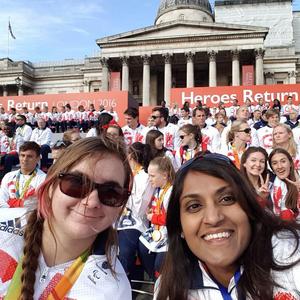 Hosted by the Queen, the Duke of Edinburgh, the Duke and Duchess of Cambridge, Prince Harry, the Princess Royal, the Duke of York and the Prime Minister, it celebrated Great Britain's record medal haul in Rio.

It followed London's thank you party where Britain's archers were among the athletes introduced to a 6,000-strong crowd of cheering supporters. Celebrations began under blue skies with the Queen's Bands of the Grenadier Guards and Coldstream Guards and the athletes were introduced by Strictly Come Dancing favourite Ore Oduba.

It was a far cry from yesterday's parade in Manchester where the heavens opened crowds packed into the city centre - and nobody cared because they were too busy cheering our homecoming Olympic and Paralympic heroes.

The athletes were aboard a fleet of specially decorated flat-back trucks as the crowds seized the opportunity to let them know just what their achievements in Rio meant to them. And it was a chance for the athletes to say thanks for the cheers, the support and for buying the National Lottery tickets that helped fund their work.

"It's amazing," said recurve Paralympian Tania Nadarajah. "All the crowds cheering in the streets... it just brings it home to you. We knew we had the support of people at home but this is just amazing. I can't tell you how much this means to all of us."

The fun did not end there of course. Our archers were among the first to take to the stage for the main celebrations in Albert Square where crowds were able to give them a welcome fit for heroes.

And tomorrow, many of our Paralympian archers will join the Worshipful Company of Fletchers for a thanksgiving service and a celebratory lunch.

The Company was formed in 1371 to ensure the quality of arrows, with only liverymen allowed to trade. Things have changed since then and it is now a charity funded by its members, or liverymen. But they put that charity to good use, helping Paralympic and other archers buy equipment. and funding training intiatives and Pass It On course.